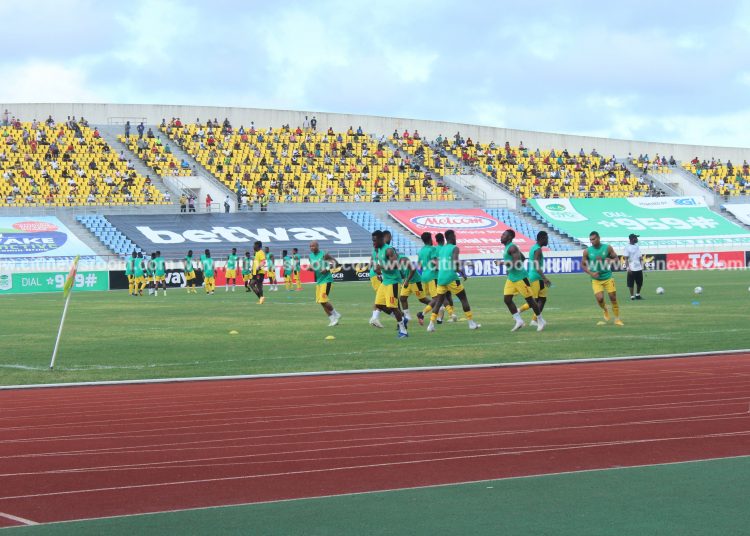 On Saturday, June 12, 2021, the Black Stars of Ghana held the Elephants of the Ivory Coast to a 0-0 at the Cape Coast Stadium in an international friendly as part of the team’s preparations ahead of the World Cup qualifiers to be played in September.

Fans finally had an opportunity to watch the team after months of absence when the team hosted La Côte d’Ivoire in an international friendly on Saturday evening.

The game was expected to have 25% of the Cape Coast Stadium’s total capacity after easing restrictions following the COVID-19 pandemic, but exceeded as thousands of spectators thronged in to watch their stars.

The starting eleven also saw the return of Ghana’s first and second team captains, Andre Ayew and Thomas Partey ahead of the key international friendly game.

The Ivorians without Nicolas Pepe, Gervinho and a few key players paraded a strong starting eleven that matched the Black Stars of Ghana boot for boot.

Both teams exchanged pleasantries and got straight to action, with Ghana starting the game on a high.

But after 45 minutes of action, none of the two West African giants could break the deadlock despite attacks of the Ivorian team with Thomas Partey testing the Sylvian Ghobou once.

During the game, some fans were denied access to watch the game even though they had paid to watch the match between the two former Africa Cup of Nations winners.

It was more of the same for both sides in the second half as they shared the spoils under the lights in Cape Coast.

After the game, Ajax player and the standout of the game for Ghana took some time to take a few pictures with some physically challenged people to cheer them up after a barren game of football.

Black Stars captain, Andre Dede Ayew also went to the east flank of the stadium to show his appreciation to them for their support.

After the game, head coach of the Ivory Coast, Fabrice Beaumelle praised the Black Stars team for the challenge, highlighted his decision to leave Nicolas Pepe, Gervinho and a few other key players in his team and gave special mention to Manchester United’s protégé, Amad Diallo, describing him as “naturally talented”.

Tottenham Hotspurs’ Serge Aurier also gave his impression about the game against Ghana and congratulated his colleagues for a good job done. He also stated that it is time for him to rest and not think of the rumour speculations linking him to PSG.

Ghana will now play against Ethiopia and South Africa in the 2022 World Cup qualifiers in September.

Thomas Partey describes his first season at Arsenal as "not easy"