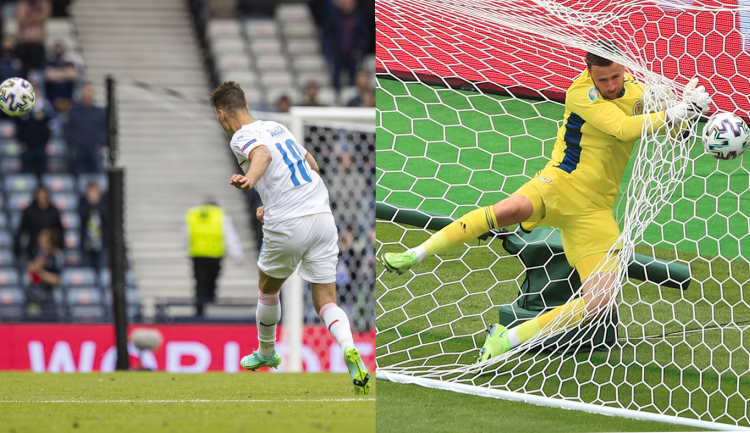 The past 24 hours of the 2020 UEFA European Championship has produced two major goal of the tournament contenders with Patrik Schick joining Andriy Yarmolenko at the top of the pile.

The Ukraine star bagged a sensational effort in a 3-2 defeat to the Netherlands on Sunday, but the Czech Republic striker’s second against Scotland in Monday’s 2-0 win was arguably better.

Schick, 25, capitalized on Tomas Soucek blocking Jack Hendry’s shot from range with a first time looping finish from just inside the Scottish half to beat David Marshall is style.

After a slow start to the tournament in terms of goals, the gauntlet has well and truly been laid down of late.

The former AS Roma and RB Leipzig man had already silenced the home crowd in the first half with the opening goal just before halftime and this finish stunned even his own fans, teammates and staff as much as it delighted them. West Ham United pair Vladimir Coufal and Tomas Soucek provided the assists for Schick’s brace as Jaroslav Silvhavy’s men impressed with their efficient display.

The Goal from a different angle:

This angle of Patrick Schick goal is unreal pic.twitter.com/DCQiGROieN

Scotland now face an uphill task to qualify from Group D after the loss. Scotland’s defeat adds extra needle to their clash with England later this week with Croatia taking on the Czechs beforehand with the chance to apply some pressure on the Scots. Should Steve Clarke’s men lose, then third place is likely to be their best case scenario and not necessarily enough to see them into the knockout phase of their first major international tournament since 1998