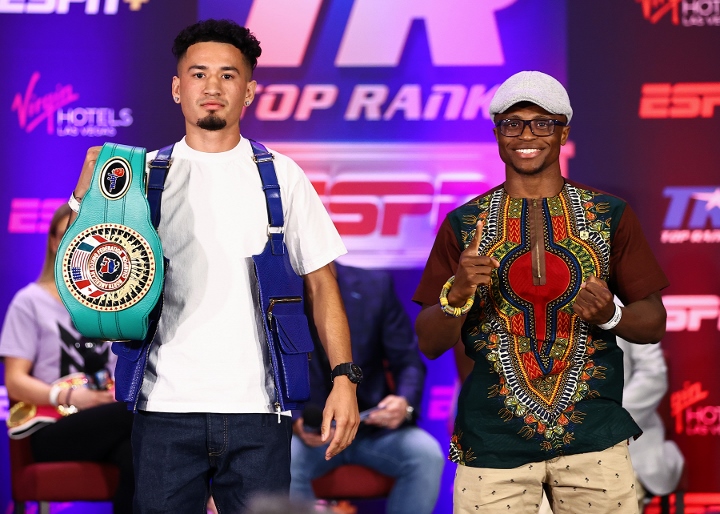 Former WBO super bantamweight champion, Isaac Dogboe, and his opponent, Adam Lopez have promised boxing fans of a great bout as the two men meet in the ring on Saturday at the Virgin Hotel in Las Vegas in the United States.

They spoke of their bout on Thursday during the mandatory pre-bout press conference. They are part of the main Naoya Inue-Michael Dasmarinas bout which will be televised and US sports network, ESPN.

For the two boxers, the bout represents an opportunity to take their charge towards a world title forward in the featherweight division and they will hope to get a very good result and give the fans a very good experience.

“This is the perfect fight I need at the moment. I need a big name like Isaac. He is a great champion and he is dedicated to the sport just like I am and I am excited to show you what I have been working on.

People should tune in because it will be a great fight.

The fans will get the best Adam Lopez on Saturday and that is what I am promising.”

That is why we are here. I want the fight to be the talk of the night.

The best Adam Lopez can also be an undisciplined boxer. I have seen him fight and I know that he can get cute and on Saturday, we will look to exploit that.”

The bout will be Dogboe’s first since his victory over Chris Avalos in June 2020. That bout was part of Dogboe’s journey towards a second shot at winning a world title.

He had previously lost his super bantamweight title to Emmanuel Navarette in 2018 and fell short in the rematch in 2019.

Lopez goes into the ring against Dogboe with his North American Boxing Federation title on the line and he will be buoyed by victories over Louie Coria and Jason Sanchez. Lopez’s current fight record is 15 wins, 2 draws and no losses in 17 professional bouts.