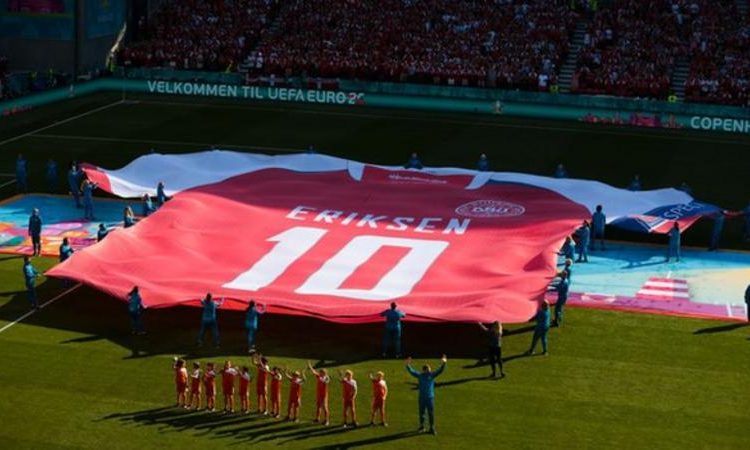 Players and fans from Denmark and Belgium showed support for Christian Eriksen during an emotional minute’s applause after halting their European Championship group game.

Referee Bjorn Kuipers stopped play in the 10th minute after Yussuf Poulsen had given Denmark an early lead.

Eriksen is recovering in hospital after he suffered cardiac arrest in the same stadium during Denmark’s opening loss to Finland in Copenhagen on Saturday.

Kevin de Bruyne inspired Belgium to a comeback victory that secured their place in the last 16.

Fans gathered in numbers before kick-off with many wearing Eriksen’s shirt, while local buildings hung banners from their windows in support.

A huge canvas was unveiled with Eriksen’s shirt on the pitch before the game and supporters from both nations displayed banners with the words “For Christian” and “Belgium loves you Christian”.

You’ll Never Walk Alone was played just before the players came on to the pitch and there was an powerful rendition of the Danish national anthem.

Poulsen scored for Denmark after two minutes, which prompted emotional celebrations from the players who raced over to their fans near the touchline.

Belgium were in possession in Denmark’s half when play was halted in the 10th minute to allow the period of applause.

“I have never seen such an emotional national anthem from the players and the fans,” she added. “Everyone is emotional. I’m sure he is watching and cheering. It has brought everyone together.”

Commentator Conor McNamara added: “[The applause was] such an outpouring of love. The love the football world has shown and how appreciated he is, is there for all to see.”

Several members of the Belgium squad have played alongside Eriksen at club level, including current team-mate Romelu Lukaku at Inter Milan.

Lukaku, who scored twice in Belgium’s 3-0 win over Russia on Saturday, shouted a message of support to Eriksen into a pitchside camera after one of his goals.

Eriksen also played alongside defenders Jan Vertonghen and Toby Alderweireld during a seven-year spell at Tottenham.

On Tuesday, Eriksen said he was “fine under the circumstances” and posted a picture from his hospital bed with a thumbs-up.

Denmark captain Simon Kjaer, who plays for AC Milan, posted a statement before the game saying the team would “play for Christian”. He will now be fitted with a heart-starting device.