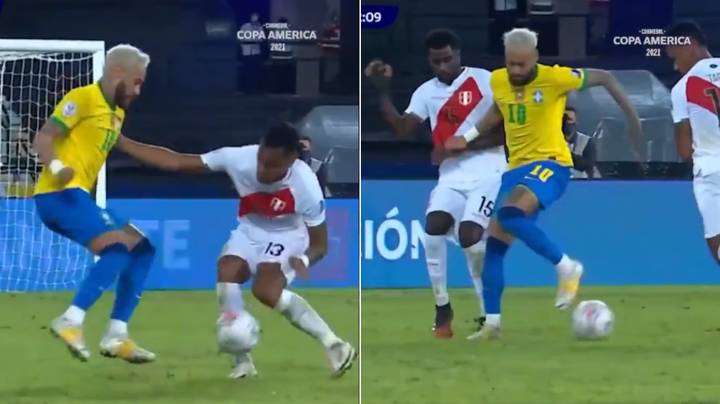 In Brazil’s 4-0 thrashing of Peru in the Copa América, their star player, Neymar, produced a moment of magic as he danced his way through three Peruvian players.

The PSG playmaker served fans a lovely treat, tossing and turning the heads of opposition defenders as the Samba Boys marched on to victory and they booked their spot to the knockout phase of the competition.

With eight minutes left on the clock, Neymar pulled off an outrageous piece of trickery as he ruthlessly played with Peru’s defence, who were left at his mercy.

Neymar turned to his party bag of tricks and destroyed not one but THREE players with a ridiculous nutmeg and roulette.

He wriggled the ball through his opponent’s legs before skipping past another player with an incredible roulette turn while showboating in front of another Peru defender.

In an era where there is very little creative expression from footballers, Neymar is a breath of fresh air. Haters will always find a way to complain, but never stop being you @neymarjr 👊🏽 pic.twitter.com/E9Qjirlc3G

The 29-year-old himself was on the scoresheet, scoring a brilliant goal in the second half.

Neymar’s strike on Friday now means he is just nine goals away from breaking Pele’s all-time goals record for Brazil.

The three-time World Cup winner has 77 international goals to his name, while the PSG star bagged his 68th goal against Peru.