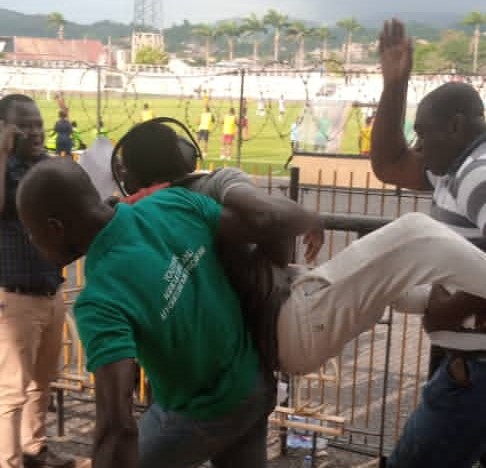 Kumasi Asante Kotoko has rendered an apology to a journalist who was reportedly manhandled during the Porcupine Warriors’ win over Karela United FC on Wednesday.

Pictures emerged after the game showing a journalist being hurled out of the commentary box by some men.

While the cause of the incident has not been revealed, it has been speculated that the reporter was thrown out after reportedly claiming the penalty awarded Kotoko in the 2-1 win was dubious, a comment that apparently angered some Kotoko fans to take matters into their own hands.

Administrative Manager of Kotoko, Emmanuel Newton Dasoberi, told Citi Sports the club is investigating the incident and rendered a full apology for the said journalist.

“I would want to unreservedly apologize for what happened to the journalist. This has not come to our attention officially but we have seen the photos and we are very sorry for what happened.

“When we play matches, a lot of things happen on our blind side and we will take this up and investigate it further because journalist should feel free and safe in the line of their duty,” he said.

On Wednesday, General Secretary of the Ghana Football Association, Prosper Harrison Addo, in an interview, entreated Kotoko to apologize to the journalist for the incident.

He said: “I expect Kotoko to apologize to the football fraternity for bundling a journalist out of Len Clay after saying penalty awarded against Karela United was a wrong call. No club has the right to eject sports journalists from match venues.

Dasoberi has taken exception to the General Secretary’s comment, accusing him of selective justice.

“If the General Secretary goes on air and asks Kotoko to apologize, we have no problem with that, but when we faced the same problem in Dormaa and were attacked, nobody asked Aduana Stars to apologize.

“I’m not saying that journalists should be attacked, but if this has happened he’s calling for us to apologize, why did he not do same when a similar incident happened to us in Dormaa?” he quizzed.

“This kind of attitude generates controversy and it’s not healthy”

Asante Kotoko face Hearts of Oak in Accra on Sunday in a match week 31 game in Accra.