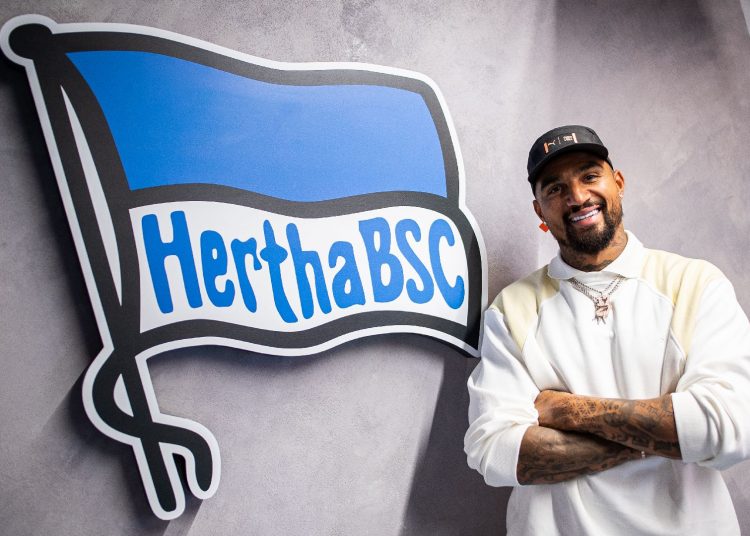 Kevin-Prince Boateng has completed his return to Hertha Berlin after a season spent in Italy with Monza.

The former Ghana international began his career at the Olympiastadion before moving to Tottenham Hotspur on a four-year deal in July 2007 for a reported £5.4 million.

Having left the Serie B side, the 34-year-old returned to familiar surroundings as a free agent after spells at Borussia Dortmund, Portsmouth, Genoa, AC Milan, Schalke 04, Las Palmas, Eintracht Frankfurt, Sassuolo, Barcelona, Fiorentina and Besiktas.

“In 2006 he made his Bundesliga debut for Hertha BSC, now our homegrown team is back in his home country: Kevin-Prince Boateng returns to Berlin and wears the blue and white jersey again,” a statement from the Bundesliga side read.

“The attacking midfielder is moving from Italian Serie B team AC Monza to the Spree and signed a contract until 2022 on Thursday.”

Under manager Pal Dardai, Boateng will wear jersey no. 27. In his first interview, he explained the reason for returning to the Berlin-based outfit.

“Hertha BSC is not just any club for me,” he said.

“I’m here to give something back. I’ve been around a lot over the years and learned a lot, but all that, my whole career, I owe to this club. I have never forgotten that Hertha was always in my heart.”

With this move, the African star becomes the club’s second signing after 24-year-old Suat Serdar, and sports director Fredi Bobic expressed his delight with his arrival.

“It does not require a long acclimatization period. Prince, with his leadership qualities in the cabin and off the pitch, is a tremendous asset to our team.

“On the pitch, he has proven himself over many years at the highest level. The overall package in this transfer is absolutely right.”

Born to a Ghanaian father and a German mother in Berlin, the veteran represented the European country at U19, U20 and U21 level.

Nonetheless, he switched his allegiance to the Black Stars in 2010 – making his debut in a 1–0 victory over Latvia in June 2010.