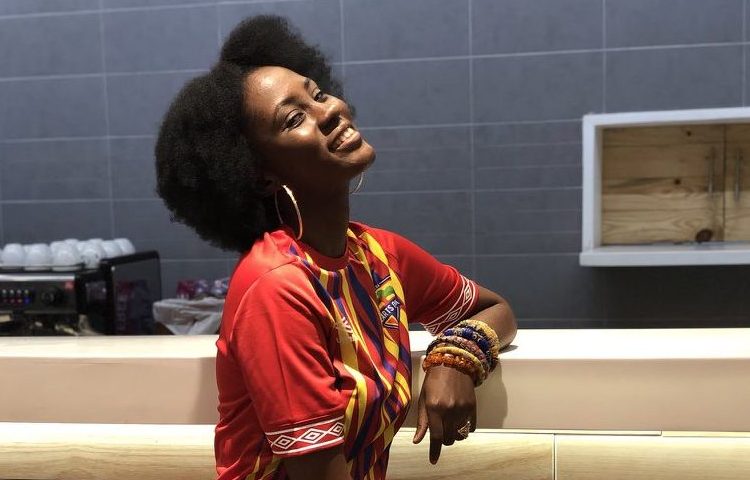 Popular Ghanaian singer and songwriter, Christie Quincyna Quarcoopome, known by most Ghanaians as Cina Soul’s accurate prediction of the outcome of Hearts of Oak’s super clash with Asante Kotoko has delighted fans of the Phobians.

While many surmised prior to the game that Sunday’s match might not be a goalfest, few were confident enough to put out a prediction.

Cina Soul was one of those few.

Tweeting before kick-off, Cina Soul, a devout Hearts of Oak fan, judging by the picture she posted which showed her in the Accra-based club’s quite fetching home jersey, expressed her pain at not being at the Accra Sports Stadium to cheer on her side.

However, the ‘Ojorley’ hitmaker did add that she was confident that Hearts of Oak would triumph over their fiercest rivals in the potential title-decider.

“I couldn’t make it to the stadium today but I have no doubt at all we’re winning today!” she tweeted.

She even stated that Hearts would win 1-0, which, of course, was exactly the scoreline the Phobians won by.

I couldn’t make it to the stadium today but I have no doubt at all we’re winning today! We are the famous Hearts Of Oak we never say die! Hearts 1 – 0 Kotoko 🌈🌹❤️ #SuperClash #Phobia pic.twitter.com/fEu0N41o1h

Daniel Afriyie Barnieh’s second-half goal gave the home side a win which took them three points clear of their opponents on Sunday.

With three games to go, Hearts of Oak are now in pole position to win their first league title in over a decade.

Fans who had seen Cina Soul’s prediction prior to the game, but had not given it much thought went back to it, praising the singer for her spot-on prediction, with some even promising her mobile money.

You should set up a church, madam!

Drop ur number for sme momo

Your correct score is magic ❤️❤️

Take a look at the goal that helped fulfil Cina SOul’s prediction below:

Don’t tell anybody that we’re a goal up against @AsanteKotoko_SC pic.twitter.com/kmbFNnRALO

GPL: “It’s not over yet”: Samuel Boadu implores players to stay focused in title race

GPL: "It's not over yet": Samuel Boadu implores players to stay focused in title race