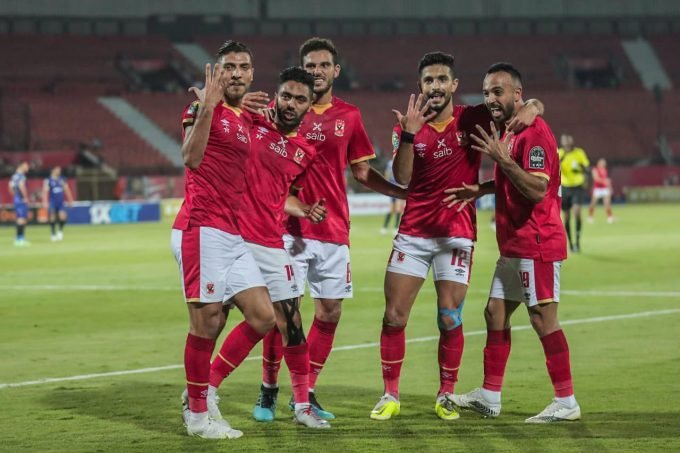 Egyptian giants Al Ahly have reached the final of the CAF Champions League for the second consecutive season after a sweeping 4-0 aggregate victory over Esperance.

The Reds entered the second-leg in Cairo with a commanding lead, having clinched an away 1-0 victory in Rades, thanks to Mohamed Sherif.

As expected, the Tunisians started the match with high pressure, but the Egyptian defenses were not easy to break, with Al Ahly depending on the counter-attacks with long balls.

The nearest Esperance came close to scoring was when Abdelraouf Benguit forced El-Shennawy to parry his shot from outside the box.

The most dangerous chance came after 30 minutes, when Ali Maaloul found Hamdi Fathi inside the box with a smart ball; however, Moez Ben Cherifia denied him from close range.

Pitso Mosimane’s philosophy proved a success in the 35th minute when Mohamed Sherif sent Taher Mohamed through on goal, forcing Ilyes Chetti to bring him down inside the box. After consulting the VAR, the referee awarded the hosts a penalty, while showing the defender a red card.

Penalty kick specialist Ali Maaloul stepped up and sent Ben Cherifia the wrong way, to put Al Ahly closer than ever to the Champions League final.

In the second half, Al Ahly possessed the ball to enforce their lead in the game, and only ten minutes later, Afsha put Mohamed Sherif through on goal and the striker accepted the gift and easily doubled the scoreline.

That wasn’t the end of it, just five minutes later, Afsha came back to haunt the Tunisian defenses when he sent another through ball but this time to Hussein El-Shahat, who lobbed the keeper to kill the tie.

Al Ahly came close to widen the gap when Mahmoud Kahraba found the back of the net, but it was ruled out for offside on the former Zamalek forward.

Title-holders Al Ahly will now be facing South African club Kaizer Chiefs in the CAF Champions League final, which will take place on the 17th of July at Mohamed V Stadium in Morocco.