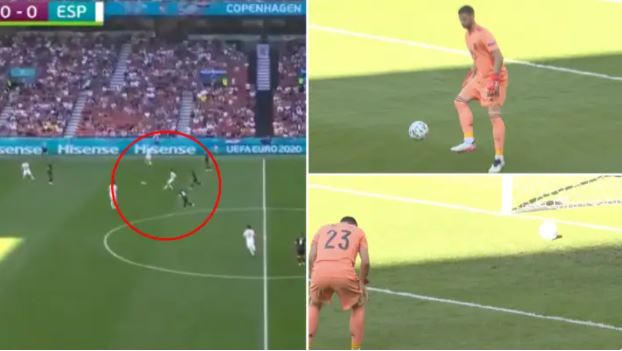 Spain goalkeeper Unai Simon conceded one of the worst own goals you’re likely to see in a tournament knockout game, as the Athletic Bilbao goalkeeper failed to control a back pass.

Luis Enrique’s team failed to live up to their usual billing in the opening two group games, as they were criticised for lots of keeping the ball and passing sideways, without penetrating the opposition’s defence much.

In the third group game they secured qualification into the knockout stages by beating Slovakia 5-0, helped by Martin Dubrovka’s poor own goal.

Why is the spainish Karius in goal for Spain? When God has blessed your country with David De Gea, you play him. pic.twitter.com/V0hlZDNn3h

However on Monday, Spain mixed the worst of their backwards passing with the worst of goalkeeping as Simon miscontrolled Pedri’s back pass from a long way out and the ball ran into his own net, giving Croatia the lead.

Enrique’s side had finished second in their group, after saving themselves with the win in the final group game, but were still going into the last 16 game as favourites against Croatia.

The 2018 World Cup finalists also needed a win in their final group game, against Scotland, in order to secure a place in the knockout stages, and finished above Czech Republic in 2nd only on goals scored.

Spain had the perfect chance to take the lead after just 15 minutes when Pedri played in Koke but the midfielder could only shoot straight down the middle of the goal at Dominik Livakovic in the Croatia goal.

Alvaro Morata then had a chance to silence his haters in the 19th minute when he was virtually unmarked in the box but could only head the ball into Livakovic’s arms.

That came just a minute before Simon’s unfortunate own goal, and no doubt was a further blow to Morata’s confidence.

Fortunately for the Juventus striker his side were soon back level. Pablo Sarabia blasted home from inside the box, after Livakovic had initially saved from Jose Gaya.