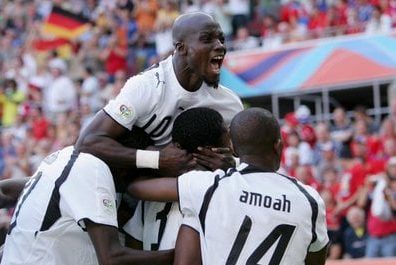 Former Black Stars captain, Stephen Appiah recently sparked a huge argument on social media when he put himself at the top of a list of the best Black Stars players of the last three decades.

While many people were quick to berate Appiah, his performances for Ghana at one of the country’s major international tournaments, show that he might have had a point.

Ghana’s 2006 World Cup run, only second to the quarter-final appearance four years later set the tone for the national team’s image over the next few years, and Appiah was right at the heart of it.

Having lost the opener against eventual champions, Italy, the Black Stars needed a massive performance against the hugely talented Czech Republic in their next game.

And Appiah stepped up.

Everyone remembers Asamoah Gyan’s brilliant goal to put the Black Stars ahead inside two minutes but the build-up seems to have conveniently been forgotten.

After a corner was punched clear by Petr Cech, Appiah lifted the ball over his marker with his first touch, took a second to settle himself, and played a pinpoint pass to Gyan which just evaded the Czech defender.

The rest, of course, is history.

His involvement in the second goal was crucial as well as he led the Stars’ three-on-four attack in the second half, visibly orchestrating Asamoah Gyan and Sulley Muntari’s movement and passes.

He might have got a goal at the end of the move if Muntari had opted to pass to him instead of shoot.

Take a look at his key involvements below:

#OnThisDay in 2006, Asamoah Gyan & Sulley Muntari were on the scoresheet as Ghana won their first game at the World Cup. 🇬🇭@ASAMOAH_GYAN3’s goal after 70sec, was the fastest in the competition that year. 💨

“One mistake cost us against Hearts of Oak”- Mariano Baretto