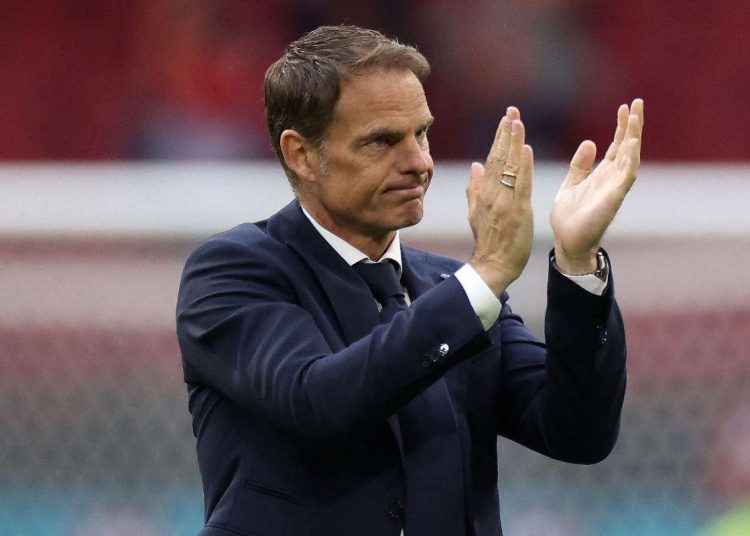 Frank de Boer has stepped down as Netherlands coach two days after the team crashed out of Euro 2020 at the hands of Czech Republic.

The former Inter Milan and Crystal Palace boss replaced Ronald Koeman last summer after his appointment at Barcelona, but was surprisingly knocked out of this summer’s major tournament in the round of 16.

De Boer’s Netherlands deal would have been automatically renewed had he secured a quarter-final berth, but the 51-year-old told the Dutch FA (KNVB) he was unwilling to continue, admitting his “goal has not been achieved”.

Frank de Boer steps down immediately as coach of the Dutch national team.

Thank you @FdeBoerofficial for all your efforts. We wish you all the best. https://t.co/izIGRxGjwu

“In anticipation of the evaluation, I have decided not to continue as national coach,” De Boer said via a KNVB statement. “The goal has not been achieved, that is clear.

“When I was approached to become national coach in 2020, I thought it was an honour and a challenge, but I was also aware of the pressure that would come upon me from the moment I was appointed.

“That pressure is only increasing now, and that is not a healthy situation for me, nor for the squad in the run-up to such important matches for Dutch football on their way to World Cup qualification.

“I want to thank everyone, of course the fans and the players. My compliments also to the management who have created a real top sports climate here on campus.”

De Boer was appointed Netherlands boss in September last year but failed to win any of his first four matches in charge, becoming the first permanent Dutch boss to do so.

He led the Oranje to an impressive Group C campaign at Euro 2020 where they picked up three wins out of three against Ukraine, Austria and North Macedonia.

But they failed to reach the final eight of the competition after goals from Tomas Holes and Patrick Schick, paired with a red card to Matthijs De Ligt, gave the Czechs a shock win.

“The choice for Frank turned out differently than we had hoped,” said KNVB director of football Nico-Jan Hoogma. “A successor must now be found by me, after good internal consultation.

“It is imperative to do so, because on September 1st we will be playing an important qualifier against Norway in Oslo. We will now evaluate further, broader than just the coach, sharpen the profile, and do the work that can be expected of us here.”