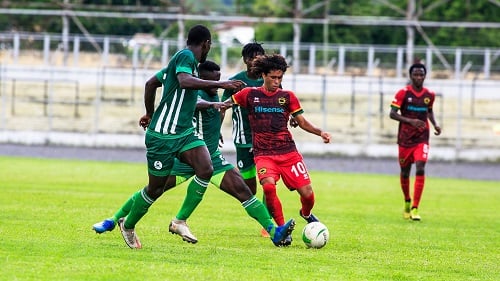 Asante Kotoko’s title chances further took a hammer blow as they were forced to fight back and salvage a draw at home to city rivals King Faisal on match-day 32 of the 2020/21 Ghana Premier League.

The relegation-threatened visitors scored first but their first-half lead was cancelled out by a controversial late goal Andy Kumi at Len Clay Stadium Saturday afternoon.

Zubairu calmly shot Faisal into the lead in the 15th minute after collecting a superb cross from teammate Enoch Morrison.

The Insha Allah boys were happy to cede possession to the desperate Porcupines while keeping their solitary goal lead intact.

Skipper Kwame Peprah should have scored in the 70th minute to put the game beyond Kotoko but his strike agonizingly came off the upright after rounding goalkeeper Kwame Baah.

Kotoko eventually saved their faces by grabbing the equalizer in the 84th minute through substitute Francis Andy Kumi who headed home from close range. Faisal players protested for an offside but their calls fell on deaf ears.

King Faisal came close to snatching the match-winner during stoppage time but their finishing let them down.

The 1-1 result means second-placed Asante Kotoko are now on 57 points while King Faisal move to 37 after 32 matches.