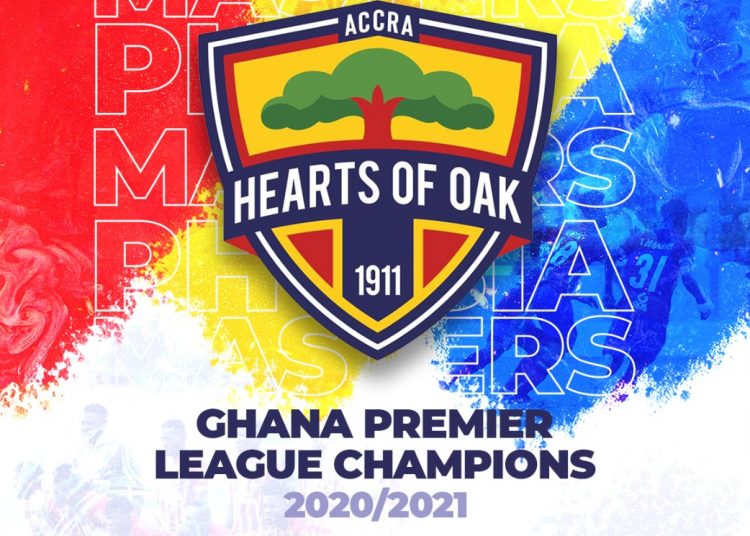 Accra Hearts of Oak were crowned Ghana Premier League champions for the 21st time in their history following a 1-1 draw with Liberty Professionals at the Accra Sports Stadium.

Hearts of Oak had gone into the game knowing they would be champions if they won or if Kotoko lost to Bechem United.

Daniel Afriyie Barnieh scored on the stroke of halftime to give the Phobians the lead.

With five minutes left on the clock, confirmation came that Kotoko had lost 2-1 to Bechem United, and the Hearts of Oak fans erupted in celebration before Liberty equalised in the last 3 minutes through Paul Kwame.

Elsewhere, Bechem United defeated Asante Kotoko to boost their chances of staying in the league while bringing an end to the title hopes of the Porcupine Warriors.

A first-half brace by Steven Owusu gave the Hunters a memorable 2-1 win in what has been an inconsistent season for them.

A defeat would have seen them level on points with other relegation candidates but following the win against Kotoko, they will now need a draw in their last match against Ebusua Dwarfs to remain in the Ghana Premier League.

At the Obuasi Len Clay Stadium, AshantiGold SC and Dreams FC shared the spoils in a goalless stalemate at the Len Clay Stadium in Obuasi in the penultimate match of the season.

AshantiGold will host Inter Allies FC in the last round of the Ghana Premier League while Dreams will take on Great Olympics in Accra.

Midfielder, Tetteh Nortey opened the scoring as early as the fourth minute before referee Isaac Osei, awarded a dubious penalty to the hosts, which was expertly converted by Kwame Simms in the 48 minute.

Abass Ganiu scored the third again through a contentious penalty with one minute left on the regulation time before Prince Opoku Agyemang climbed off the bench to net the consolation seven minutes into injury time.

Karela United continued their downward spiral in the league after falling to a 2-0 defeat to WAFA at the Cape Coast Stadium.

WAFA will face newly-crowned champions Accra Hearts of Oak on the final day.

King Faisal beat Ebusua Dwarfs 2-0 to boost their chances of survival in the Ghana Premier League.

The game was initially expected to take place on Saturday but was rained off.

Kwadwo Frimpong opened the scoring for the hosts in the 52nd minute before Zubairu Ibrahim doubled the lead for King Faisal in the 62nd minute.

The win sees King Faisal move up to 13th place and away from the relegation zone.

Benjamin Abaidoo shot the hosts in the lead right at the stroke of halftime but Gladson Awako pulled Olympics level after the break.

With the game drawing to an end, Kofi Owusu snatched a late winner with a superb strike.

The win keeps Berekum Chelsea four points clear of the drop with better head-to-head stats against their rivals in the bottom half.

Benjamin Tweneboah gave the visitors the lead in the 6th minute before Emmanuel Osei Baffour doubled their lead after 12 minutes.

Inter Allies had an opportunity to reduce the deficit before the break after being awarded a 44th-minute penalty due to a handball, but Andy Okpe missed the chance to bring Allies back into the game.

Four minutes from time, substitute Taufiq Shaibu managed to pull one back for the home side.

Brabby Kofigo restored the two-goal lead for the visitors before defender Farouk Adams made it four.

Inter Allies managed to pull another goal back through Sunday Kalu but it wasn’t enough to avoid defeat.

Elmina Sharks beat Legon Cities 2-0 to take the fight for survival to the last day,

The win sees Elmina Sharks in 16th place once point behind safety whiles Legon Cities sit in 14th just a point above the relegation zone.

Sharks left it late to secure all three points as Benjamin Boateng gave the hosts the lead in the 79th minute before James Bissue sealed the win in extra time.