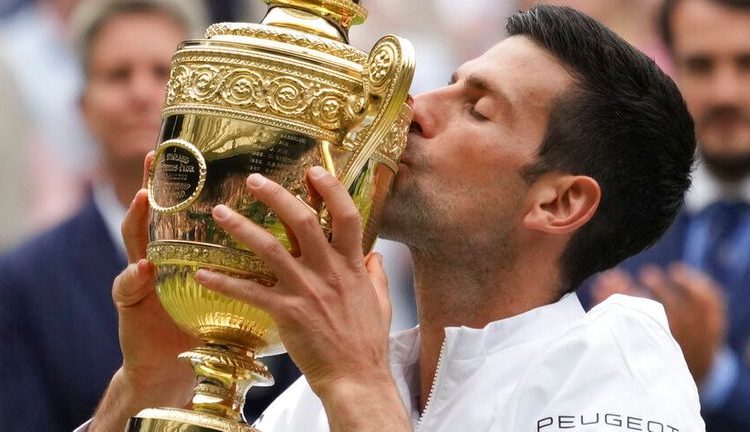 Djokovic eventually overawed Italian seventh seed Matteo Berrettini 6-7 (4-7) 6-4 6-4 6-3 on Centre Court to become the first player since Rod Laver in 1969 to win the first three titles of the year, keeping him on track to emulate the Australian by claiming a calendar Grand Slam.

Throw in an Olympic singles gold medal in Tokyo, for which he will also be favourite, and Djokovic is on course to become the first man ever to win a Golden Slam.

“That was more than a battle. Congratulations to Matteo for a fantastic tournament. It was a tough match today. He’s a true Italian hammer,” said Djokovic.

“Winning Wimbledon was always the biggest dream as a kid. I have to remember how special this is and not take it for granted and be aware this is a huge honour and privilege.

“From being a seven-year-old constructing a Wimbledon trophy out of raw materials to standing here with a sixth trophy. It’s incredible.”

Congrats Novak on your 20th major. I'm proud to have the opportunity to play in a special era of tennis champions. Wonderful performance, well done!

On drawing level with Nadal and Federer, he added: “It means none of us three will stop!

“I have to pay a great tribute to Rafa and Roger. They are legends of our sport. The two most important players I ever faced.

“They are the reason I am where I am today. They made me realise what I had to do to improve. The last 10 years has been an incredible journey that is not stopping here.”

GPL: Hearts of Oak crowned Champions for 21st time after draw with Liberty