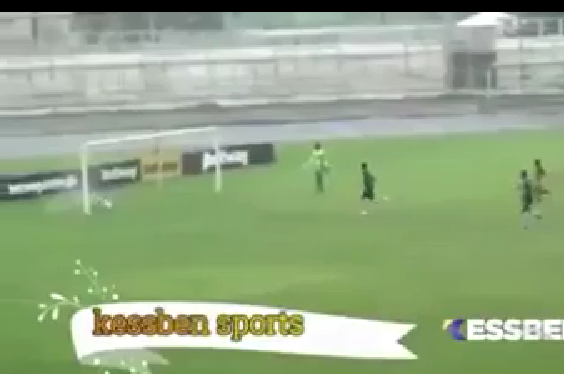 Fans of the Ghana Premier League were shocked on Sunday after footage of an Inter Allies player, Hashmin Musah, scoring two own goals in their match against Ashgold went viral.

Ashgold won the match, which was their last of the league season, 7-0, aided by Musah’s bizarre own goals.

The first of Musah’s own goals came with Ashgold leading 5-0 in the 78th minute, with the second coming four minutes later.

The player has since justified his actions, stating in an interview with Kumasi FM that he put the ball past his own goalkeeper twice to ruin an apparent bet that had been made prior to the game, predicting a 5-1 scoreline.

He said his actions were as a result of his derision for gambling.

“I heard it in our hotel that a bet had been made for a  correct score line of 5 goals to 1 against my club Inter Allies.

He said his technical team commended him for his actions after the game.

“After the game my technical team commended me for spoiling the bet they had staked.

Inter Allies were relegated prior to the weekend’s final round of matches while Ashgold would have been safe regardless of their result on Sunday.

The Ghana Football Association has, however, begun investigations into the incident.

In a statement released on Monday, the GFA also said it will lodge a complaint with the police for a criminal probe to commence.

“The Ghana Football Association (GFA) wishes to inform all its members and the public that the Association has opened investigations into the Ghana Premier League Match-day 34 game played between Ashanti Gold SC and Inter Allies FC at the Len Clay stadium at Obuasi on Saturday, July 17, 2021.”

The craziest own goals ever in the history of football.