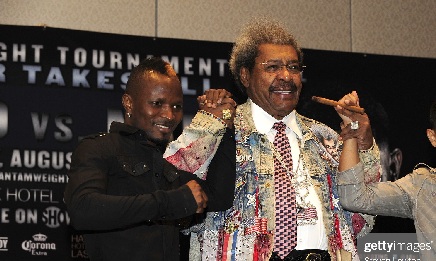 Ten years after losing a unanimous decision to Abner Mares in an IBF Championship fight, Joseph Agbeko has blamed his defeat on his then promoter, Don King, whom he accused of selling the fight.

The former International Boxing Federation (IBF) bantamweight champion explained that Don King refused to co-promote his rematch with Mares despite that being the agreement for the bout.

Agbeko, who had lost a controversial majority decision to Mares in their maiden fight in August 2011, failed to recapture his title in a rematch four months later.

Narrating events which led to his second defeat to Mares, Agbeko recalled that he lost the fight before entering the ring due to his opponent’s Golden Boy Promotions hijacking the bout.

“So many things happen in fights which people don’t know,” Agbeko said. “My promoter at the time, Don King, was supposed to team up with Golden Boy to stage the fight but that didn’t happen.

“I got to know at the last minute that the fight had been sold to my opponent’s camp and that allowed them to take over the bout,” he revealed.

Mares won the fight 118-110 on all the three judges’ scorecards to earn a deserved unanimous decision. The loss led to Agbeko’s split with Don King which stalled his career for two years.

“I was frustrated after the second fight with Mares so I decided to take Don King to court after realising the negative people around me.

“I decided to take the case out of court because it was stalling my career and prevented me from fighting for two years,” he concluded.