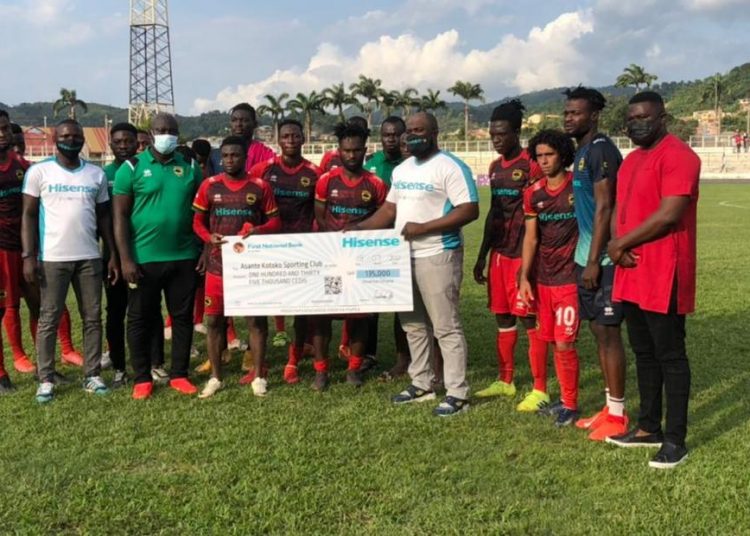 It has emerged that Asante Kotoko sponsors, Hisense, paid a combined Ghs 25,000 to opposition players for scoring against the Porcupine Warriors in the second round of the 2020/2021 season alone.

When Kotoko signed the deal with the electronic giants last year, it was rumored the company inserted a clause in the contract mandating to pay opposition players Ghs 5,000 for each goal they scored against the Porcupine Warriors.

The idea was to motivate Kotoko to keep as many clean sheets as possible.

However, it appeared the unusual clause has become counter-productive, motivating opposition players to try harder to breach the Kotoko backline.

Elmina Sharks’ Faisal Mustapha  took home a cheque  for GH¢5,000 for scoring against Kotoko  in the first round.

Again, Elmina Sharks’ Tahir  Mensah, who scored the winning goal against Kotoko on the final day of this season’s league received a cheque for GH¢5,000.

At the Cape Coast Stadium,  Bechem United’s  Steven Owusu Kaakyire  received  a cheque  for GH¢5,000 from officials of Hisense for scoring against Kotoko on match day 33, while Medeama’s Richard Boadu took home a cheque for GH 5,000 at the Akon Stadium, Tarkwa.

Earlier  at the Accra Stadium, current league champions Hearts of Oak’s Daniel Afriyie Barnieh  had his share of the reward package (GH¢5,000) after scoring against the Porcupine Warriors in their crucial decider