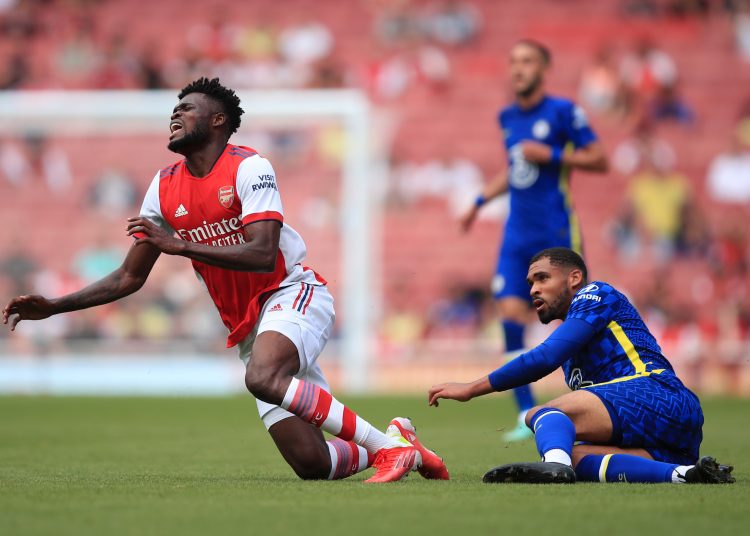 LONDON, ENGLAND - AUGUST 01: Thomas Partey of Arsenal tangles with Ruben Loftus-Cheek of Chelsea during the Pre Season Friendly between Arsenal and Chelsea at Emirates Stadium on August 1, 2021 in London, England. (Photo by Marc Atkins/Getty Images)

Arsenal have confirmed that Thomas Partey will be out for three weeks with an ankle injury.

The Ghanaian international was substituted in the Gunners’ 2-1 loss to Chelsea in a preseason friendly last Sunday at the Emirates.

The Arsenal statement reads: “Right ankle. Thomas sustained an injury to ligaments in his right ankle during the friendly match against Chelsea last Sunday. Thomas continues to be assessed and is expected to be back in training in approximately three weeks”.

Partey, who joined Arsenal last October from Atlético Madrid, appeared to suffer an ankle injury following a tackle by Chelsea midfielder Ruben Loftus-Cheek and was withdrawn five minutes before half-time.

The injury means the 28-year-old will likely miss Arsenal’s games against Brentford, Chelsea and Manchester City.

Other players like Eddie Nketiah and Gabriel Magalhães have been confirmed to be injured and will be sidelined for some time.