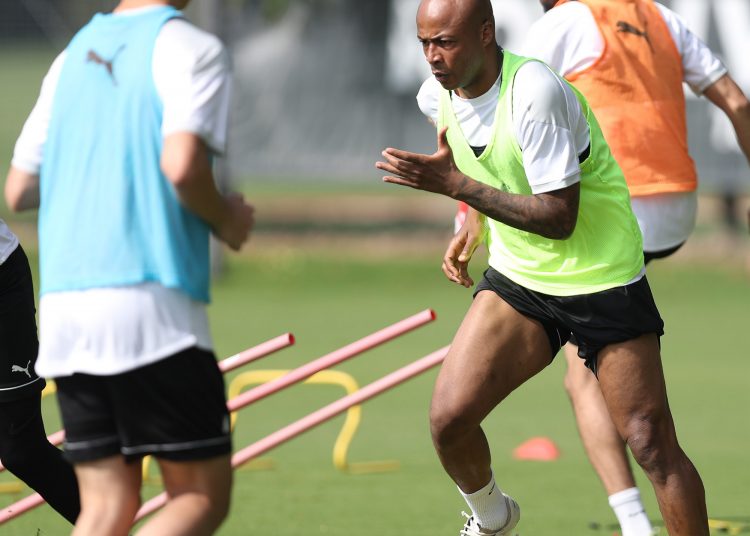 Black Stars skipper, Andre Ayew, has thanked his new team mates at Qatari club, Al Sadd, for helping him to settle in at the club following his arrival in July.

Ayew joined Al Sadd last month after his contract with Swansea City expired. He was linked to clubs in England and Turkey but he decided to take his footballing skills to the Middle East.

He was speaking to Al Sadd’s official website on Saturday on Saturday in Barcelona during the team’s pre-season training camp and he said that his new team mates had been very warm to him and they had been doing their best to make him feel welcome in his new surroundings.

“Everything is great. I feel good because the players made me feel good. The players who have been here for a long time and they all accommodated me well.”

“They included me in the family and that’s very important for me because I feel before you are able to perform on the pitch, you have to feel good. The players are making me feel welcome and I want to thank them for the welcome they gave me.”

Ayew also spoke on why he decided to join the club even in the face of demand from clubs in Europe.

He highlighted the fact that his father, Abedi Ayew who once featured for the club was one reason for moving there and the other reason was how convincing Al Sadd manager, Xavi Hernandez, sounded when the two of them spoke before the move.

“To be honest, Al Sadd is a club I know and I have followed for a long time. My father played here and this is the club that gave him the opportunity to leave Ghana. So it’s a club that I always followed. I followed the players who played here: Raul, Mamadou Niang, Abdelkader Keita – a lot of players played for this great club.”

“It’s also a club which I have a personal history with due to my father
I followed the club when I was young because my father always followed the club’s results. It wasn’t a surprise for me, I was very happy and proud, but I had to take some time to make the decision, because I had a few offers from the Gulf and from Europe, so I had to take time to make the right decision.”

“But as soon as I spoke to the coach Xavi, I knew this was the right place for me for my future. Then I took the decision to come and everything happened fast.”

The former Marseille player stated that he was ready to win laurels with the club and contribute to the club’s overall success.

“When you play for Al-Sadd, you know you have to win everything. We will try to do what we did last season – to win every trophy. And then next year, we will have the chance to play in the Champions League.

We will take it step by step and for me, it’s important now to continue with what we started.”

“I hope I can be part of the winning team this season also inshaAllah. We will try and win maximum games and bring trophies to the club, and also try and prepare for the big tournament – the Champions League.”

The new Qatari Stars league starts in September and Al Sadd begin their campaign against Al Sailiya with their subsequent four matches against Qatar SC, Al Rayyan, AL Shamal and Al Arabi in that order.