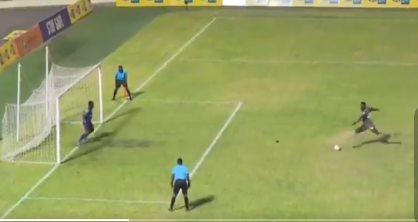 On Sunday, Accra Hearts of Oak beat Ashantigold on penalties to lift their 11th FA Cup title following an grueling 120 minutes of action at the Accra Sports Stadium.

With nothing to separate the two sides after 90 minutes and 30 minutes of extra time, the match proceeded to the shoot out to decide the winner.

Accra Hearts of Oak had the chance to win it in the first 5 kicks, but Afriyie Barnieh missed the crucial kick before Ashantigold scored to take the shoot out to sudden death at 3-3.

and Benjamin Afutu missing in the first 5 and in sudden death respectively, but the Miners failed to take advantage, missing their succeeding spot kicks on both occasions.

The Hearts of Oak goalkeeper, Richard Attah saved from Amos Addai, the very first kick of the shoot out.

And then in sudden death, when Afutu missed for Hearts, Ashantigold had the chance to win it, but Attah came to the rescue, saving from Seth Osei.

Attah then stepped up and smashed in one of the fiercest penalties any goalkeeper has ever scored before his opposite number, Kofi Mensah missed and handed the Phobians the title.

#ICYMI : How @RichardAttah16 won the #MTNFACup2021 for the @HeartsOfOakGH. Sorry Kofi Mensah you can't stop that and you can't score with that. 😝 pic.twitter.com/kUidAFMmhg