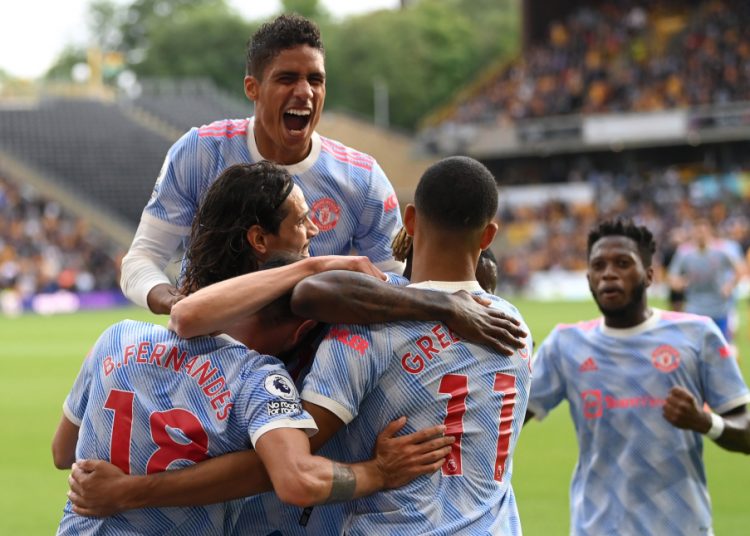 Manchester United claimed a fortunate 1-0 win over Wolves as they broke the record for the longest unbeaten away run in English football history.

Mason Greenwood scored the winner late on but questions will be raised over their performance at Molineux.

Bruno Lage’s hosts thrilled the crowd with their direct running and skill but, just like against Tottenham, they could find the end product.

They out-shot United as they bullied them on the counter with the brilliance of Adama Traore and the skill of on-loan Barcelona talent Francisco Trincao.

In the end, though, being clinical mattered and after a stunning David de Gea double-save, Ole Gunnar Solskjaer’s men got the goal when it mattered most.

Greenwood’s strike found a way past Jose Sa, leaving Wolves pointless after three games, despite impressing in their start to the season.

Wolves had Manchester United on the ropes early on in the game with their counter attacks causing all sorts of issues.

Moments later Aaron Wan-Bissaka had to make a goal-saving tackle as Trincao’s shot beat De Gea but was cut out before crossing the goal-line.

And another run and shot from Traore missed the target moments later as he gave United a torrid time from the off.

The Red Devils may have had Raphael Varane in their starting XI for the first time but even he found it hard to halt the Spaniard, deflecting one of his shots clear.

United would have their chances with Jadon Sancho, also making his full debut, missing the target and Fernandes seeing a goal disallowed for offside.

And the latter showcased his frustrations by being booked for dissent before the break as Wolves fought tirelessly on home soil.

United fans may have been having a laugh in the stands, partying with a cardboard cut-out of returning hero Ronaldo, but they had very little to smile about as the game wore on.

Trincao, Traore, and Jimenez made Wolves a huge threat on the counter.

Their biggest chance, though, fell to Saiss and De Gea pulled off two stunning saves to deny the Moroccan from a corner.

But Wolves would regret their prolificacy as their opponents claimed a controversial winner.

Ruben Neves thought he’d been fouled by Pogba but the Red Devils played on and Greenwood’s strike towards goal hit the back of the net as Jose Sa failed to get a full hand on the shot.

That’s now 28 top-flight games without a loss for Manchester United and their squad is about to get even stronger.