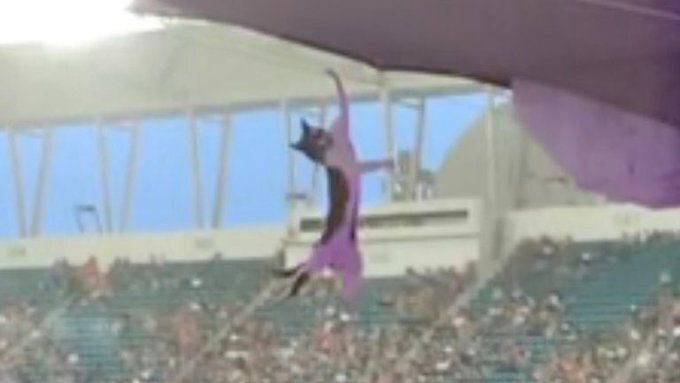 A very lucky feline escaped a terrible fate at an American football stadium over the weekend.

While fans eagerly awaited the game between Miami Hurricanes and Appalachian State at the Hard Rock stadium, the cat was clinging desperately on the edge of one of the stands.

The cat’s survival instincts helped buy time for the fans below to create a makeshift net, appropriately with an American flag.

There were screams and gasps as the cat struggled to stay up and when it lost its grip and fell.

The horror was replaced by loud cheers once it was confirmed that the animal had survived the fall.

Several angles of the incident showed the heart-stopping moment and the overwhelming joy around the stadium after the positive climax.

Take a look at the three videos below:

just when i was starting to lose faith in humanity 🥲 pic.twitter.com/5wEcraCANV

A cat survived a dramatic fall Saturday inside a packed American football stadium, after fans created a makeshift net with an American Flag to safely catch the feline. 😱

The stadium later tweeted to confirm the cat was safe… 😅🏟 pic.twitter.com/IjTWEILa2i