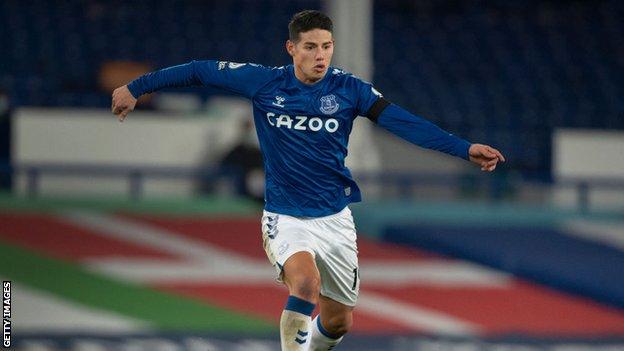 Everton midfielder James Rodriguez has travelled to Qatar for talks with a club before a potential move to the Middle East.

The 30-year-old Colombian international’s status at Goodison has looked uncertain after manager Rafael Benitez replaced Carlo Ancelotti in the summer.

The former Real Madrid player, who joined Everton for £12m a year ago, has yet to play for Benitez this season, missing several games because of a coronavirus-related issue.

His last game for the club came in a 1-0 defeat by Sheffield United on 16 May.

With Rodriguez’s wages reported to be £200,000 a week, a move to another club would be a significant financial saving for Everton.

Benitez has talked about his frustration about not being able to sign more players because Financial Fair Play rules had “killed” the club.

Prior to the win over Burnley on 11 September, Benitez said of Rodriguez’s future: “It’s always up to the player. In the end he has the final decision. Some markets are open and then we had some problem with the Financial Fair Play rules, so we need to consider any option and see what happens.”

Rodriguez, who has also played for Porto, Monaco and spent time on loan at Bayern Munich, made 26 appearances in all competitions for Everton last season, scoring six goals and registering nine assists.