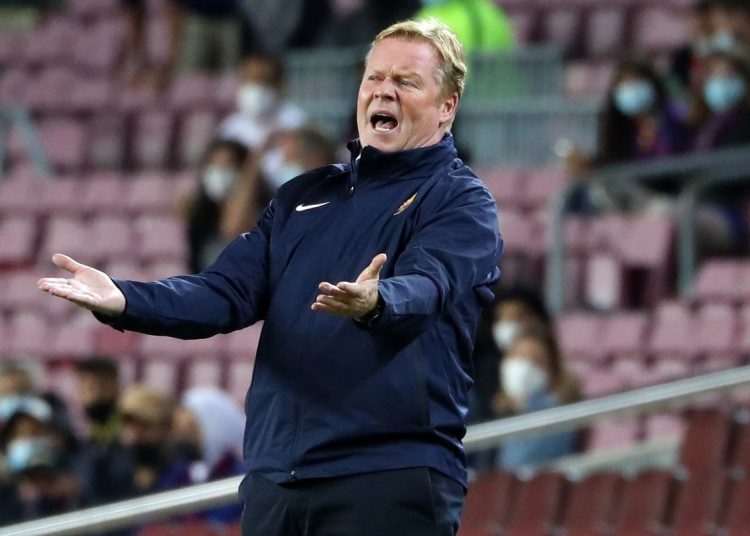 Ronald Koeman took no questions in a brief news conference and instead read a statement saying Barcelona trusted him to lead the team through a period of transition.

Pressure has mounted on the Dutchman following a disappointing start to the season, with last week’s 3-0 home defeat to Bayern Munich in the Champions League followed by a 1-1 draw against Granada in LaLiga on Monday.

Koeman, who signed a two-year deal last summer, said the process of rebuilding the club’s fortunes required patience amid their financial plight which was described as “very worrying” by president Juan Laporta last month.

“The club is with me in this period of reconstruction. We have to reconstruct the team as a squad without making big investments and this takes time,” the Barcelona head coach told a virtual news conference, reading from a statement.

“The young talents we have can become world stars in a couple of years. The young players will have opportunities, just as Xavi and (Andres) Iniesta had in their day, but we ask for patience.

“Finishing high in the table would be a success on its own and in the Champions League we cannot expect miracles. The defeat against Bayern should be taken with perspective.

“The team should be supported, with words and with actions.”

When Koeman had finished reading the statement, he got up from his seat and left.

Roberto Martinez, who has been in charge of the Belgian national team since 2016, has been touted as a potential replacement for Koeman.

Barcelona, who sit eighth in La Liga after two wins from their opening four league games, visit Cadiz on Thursday.

Speaking after centre-back Ronald Aruojo – playing as a makeshift striker – rescued a point with a stoppage-time equaliser against Granada, Koeman warned “this is not the Barcelona of eight years ago” after facing criticism of the club’s style of play.

“We changed our style a little bit,” Koeman said.

“If you see the list of players, what do you do? Play tiki-taka? Tiki-taka when there are no spaces?

“We did what we had to do. We tried to win another way. We don’t have players one-on-one or with speed. We’re talking… I’m not going to say more because it seems I have to argue about everything.”