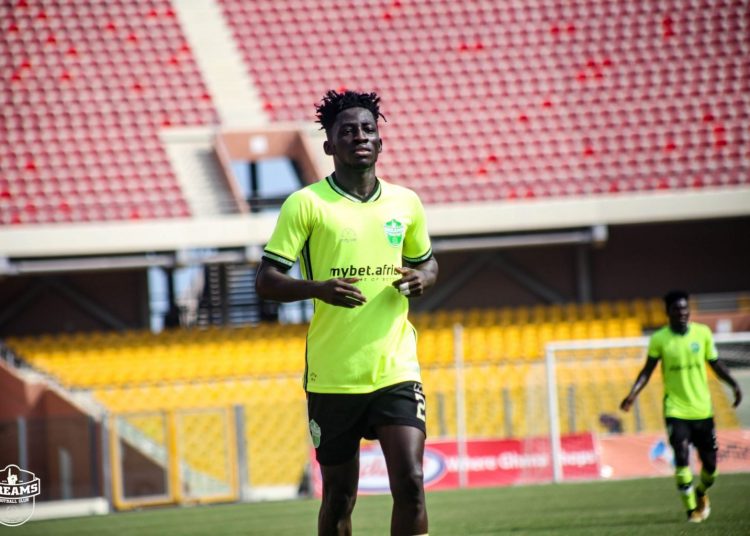 This is not a personal attack on the footballer, Philemon Baffour. This is not an attempt to deride a young footballer who has clearly got a future ahead of him.

This is a critique of a system that is setting the player up for unfair scrutiny under the guise of giving him opportunities.

Let’s face it; Baffour was not the best full-back in the Ghana U-20 side that won the CAF U-20 AFCON in Mauritania earlier this year. That player would be Samuel Ashie-Quaye.

At Dreams FC, he has looked decent and as captain, he was immediately back in the starting lineup after the U-20 tournament, playing 10 of the team’s 15 remaining games of the 2020/2021 season.

But he is not the best back up option at right back for the Black Stars at the moment. There are at least four others who can lay claim to that position creditably, including his Dreams FC teammate Victor Oduro who held the fort in Baffour’s absence during the U-20 AFCON.

When CK Akonnor first handed him a call up for the AFCON 2021 qualifiers against South Africa and Sao Tome and Principe, there were groans but many suppressed their true feelings about the decision mostly because they deemed it a reward for the U-20 win; nevermind that he was not one of the best players at the competition.

He was not expected to play against South Africa as Ghana needed all of its strongest arsenal to secure the AFCON slot. But by the time Ghana hosted Sao Tome, the Black Stars’ ticket to Cameroon was booked. Akonnor tried a few fringe players but Baffour was never given a run-in.

Akonnor handed him another call-up for the friendlies against Morocco and Cote d’Ivoire. Surely, he must play at least a few minutes of one of these games, right? Wrong. He was not featured.

When Baffour was named a 3rd time for World Cup qualifiers against Ethiopia and South Africa, it was now apparent that he was the new Edwin Gyimah, a player most notably handed Black Stars call ups but was never featured.

There was no bigger slap in the face for the player himself than when he was overlooked for Fatawu Mohammed, a player only called up due to the absence of first choice right-back Andy Yiadom, in the game against South Africa.

And get this: Mohammed, who played full throttle against the South Africans on his debut, has been dropped; and Baffour, who was benched for Mohammed, has been recalled. Is this logical?

That was supposed to be Baffour’s due date. Having been back-up for so long, Yiadom’s absence provided a clear pathway into the starting position; a chance to finally get some minutes. But Akonnor did not believe that much in the 21-year-old, and instead, started Mohammed, the backup to the backup.

If Ghana are serious about winning the AFCON, the team cannot afford to have cosmetic players in the team. Every player must be deemed good enough to compete for a slot in the starting eleven.

If Baffour is not ready to play, leave him out. He is a young player with a great future ahead of him. He listens to all of the rhetoric around the team whenever he is included in the squad. He knows people question his inclusion. That is not what a young player needs.

The Ghana Premier League ended in July 2021. It’s been more than two months since then and Baffour has not played competitive football. Under what justification is he being called? This is quite frankly ridiculous.

It is quite clear Ghana has issues at right-back and at the moment, Baffour is not the solution. Akonnor made that clear in all previous times he’s called him up.

At age 35, Harrison Afful still plays like a young man in the Major League Soccer (MLS). Alongside Jonathan Mensah, he marshalled Columbus Crew to an MLS Cup last season, playing 20 matches in the process.

Afful still shows his crossing is superb with 12 successful crosses into the penalty area last season.

For a full back, Afful ranked 3rd in the MLS in dribble success rate with 88.2% and ranked 8th in terms of progressive passes.

This season has not been different. In his 20 appearances so far, the former Kotoko player has racked up 43 interceptions.

This looks like a player that can still contribute significantly to the national team.

Wouldn’t you rather have a player like this competing with Andy Yiadom for that right-back spot?

The GFA President has asked for Ghanaians to be positive in their critique of the team. I think this is only possible when we make decisions that are solely targeted at improving and building a team capable of winning the AFCON.

Unfortunately, the continuous inclusion of Philemon Baffour does not give the team any competitive advantage. It is defeatist at best and a travesty at worst.