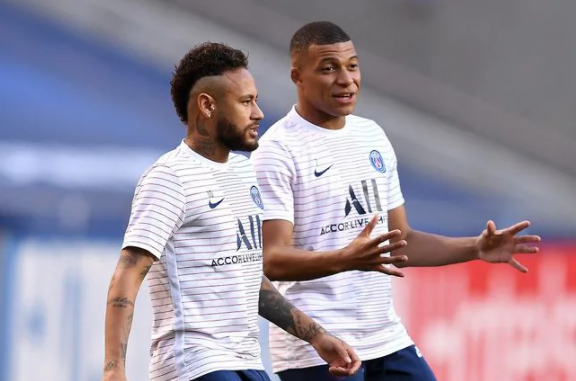 PSG were leading 1-0 when Kylian Mbappe was subbed off in the 87th minute.

Just moments later, Neymar found Julian Draxler in the box and the German made no mistake as he gave his side a two-goal lead.

A camera captured Mbappe’s reaction to the goal and he was not happy at all.

Turning to Idrissa Gueye, a visibly annoyed Mbappe said, per RMC Sport: “He [Neymar] does not give me that pass”.

Eurosport journalist Cyril Morin has expanded on Mbappe’s actions and why his frustration boiled over.

“He was very p***ed off with both his and Neymar’s individual displays – he thought his team-mate played on his own too often,” he wrote.

But it turns out that the frustration has been festering for a few months now.

L’Equipe have published a report detailing their tense relationship.

They started by saying that while there is a respect for one another, their relationship isn’t as strong as it once was.

Kylian Mbappe has reportedly been pushing for a move away from PSG for some time and has his eyes set on a move to Real Madrid.

Neymar did not understand why Mbappe was reported to be so keen to leave the club. Mbappe had not spoken about his transfer plans with the Brazilian.

The Frenchman has also been left feeling ‘isolated’ with so many South Americans having joined the side.

While Neymar and the other Brazilians in the squad do not understand why Mbappe has not been present in some squad meetings away from the field.

They did mention that the two held talks before PSG training on Sunday to stop their relationship rotting and the two were captured in good spirits in Monday’s session.

Whether their differences have been completely resolved remains to be seen.

Mauricio Pochettino spoke about their relationship in his press conference on Monday and he insists there is nothing to worry about.

He said, per Get French Football News: “They’re two fantastic guys. In football, these kinds of things happen between competitors. Here, the objective is to win. [The incident] made a lot of noise outside of the club, but internally it was nothing. The two had a chat, I spoke with them as well and you saw in training that they were laughing between themselves.”

“The players are calm and training well. There is a good atmosphere. I’ll say it again: we are at a special club and we have to accept the fact that we will go through special situations, that are different to elsewhere. This has to be understood. But the squad is doing very well and is very well balanced.”