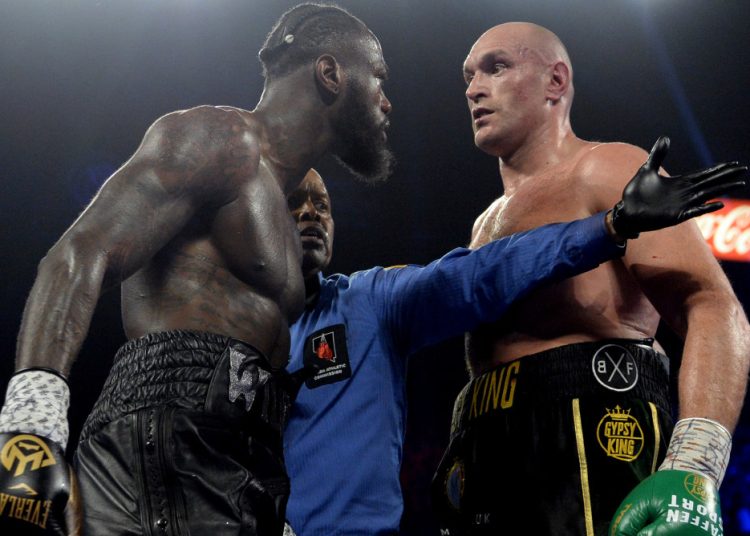 It feels so good to have proper headline boxing bouts lined up in succession after dealing with the malaise of exhibition fights that dominated the better part of the year.

Uysk-Joshua excelled and there is Shawn Porter v Terrence Crawford on November 20, Ryan Garcia v Joseph Diaz on November 27 and Gervonta Davis takes on another knockout specialist in Rolando Romero on December 5 to come. In a few hours, Fury-Wilder III takes center stage.

The skills of Deontay Wilder have definitely improved if snippets from his training camp are to go by and his power still remains second to none, but these two variables don’t hold the key to unlock World Boxing’s Heavyweight Matrix door named Tyson Fury.

Oleksandr Usyk’s camp will gripe at that notion judging by the supreme skill he has shown through three fights in the heavyweight division including the infamous smooth operating job on Anthony Joshua.

However, it is precisely his small sample size of bouts in the division why Fury gets the nod as the most puzzling heavyweight boxer to take down. Wilder’s key to beat Fury and possibly force a fourth bout between the two to decide which boxer ultimately comes out on top of their legendary run lies in THE SETUP.

Deontay isn’t going to outbox Fury and he would be so so wrong to do so especially after seeing Joshua do same and fail badly against Usyk just a few weeks ago.

Though Wilder has switched trainers to rein in Malik Scott who is hell bent on sharpening the 6 foot 7 puncher’s overall body of work coupled with two extra months of training due to Fury testing positive for COVID to force tomorrow’s bout to scale back on its original scheduled date, it is still not enough to get past Fury who is the Big Bad Wolf who operates like the Wily Fox.

Wilder still needs to rely on his power and limited skill to get past Fury once he sets him up by first connecting with the left hook.

The left hook holds the key to a Wilder win just as it almost did in the first fight. By catching Fury with the left hook, Wilder scored the first of two knockdowns on Fury by hitting on the top of the head with his right as Fury stooped to lessen the impact of the left hook. By going low, Fury gave Wilder enough room to generate enough velocity to ally with his innate power right hand to force Fury to the canvas.

The allure of the knockdowns in the fight glossed over an important tactic Fury deployed in the fight that got its highlight moments in the near one sided second bout Fury won.

The Gypsy King fought closer to Wilder’s right side than he did on the latter’s left and by closing the distance between himself and the much feared Wilder right hand, he took away the Bronze Bomber’s biggest advantage. In the opening rounds of the second fight Wilder looked himself, he landed a couple of right hooks to Fury’s chin but had little impact on the Englishman because of the shorter distance he put between himself and Wilder’s right hand.

On the flip side, Wilder could have and should have leaned more into landing body shots with his left to sap Fury’s energy. With a bruised midsection, Fury would have had to get a bit more central to defend better against the body shot and in the process generate enough room for Wilder to land heavier punches.

Wilder’s legacy as an all time great is at stake here and should he fail to beat Fury via a knockout (there is no way he goes the distance and wins a decision against Fury), even his reputation as the hardest puncher in the division and pretty much the sport would be questioned seriously.

On one of the undercard fights on the night, Nigeria’s Efe Ajagba takes on Frank Sanchez with Ajagba’s flawless record on the line. The 6 foot 6 inch Ajagba has won all 15 fights he has been involved in with 12 coming via knockouts after connecting with his deadly right hand that has drawn comparisons to Wilder’s. Like Wilder, Ajagba wholesomely relies on his knockout power and not skill to score wins. To fully understand how powerful Ajagba’s punch is, just check out his third round stoppage of American Brian Howard in April this year.

No advance aged boxer gets ultimately skilled in the sweet science in under two years in real life; the Jake Gyllenhaal led boxing movie “Southpaw” is the only space where an orthodox boxer with a terrible defence but a strong chin and knockout power modifies his style to the point he knocks out his nemesis fighting out of the Southpaw stance mere months after adapting his fighting style.

For half a decade, the fates of Joshua, Wilder and Fury has been tied and via Joshua’s shock defeat to Usyk, Wilder will know he isn’t getting a win over Fury by out boxing Fury. The only way he gets the win is via knockout and to get that, Wilder’s left hand needs to connect on body shots or hooks to the chin to setup the vaunted right hand to complete the ultimate combination to finish off Fury. That aside, Tyson Fury wins plants Wilder in the shadows.