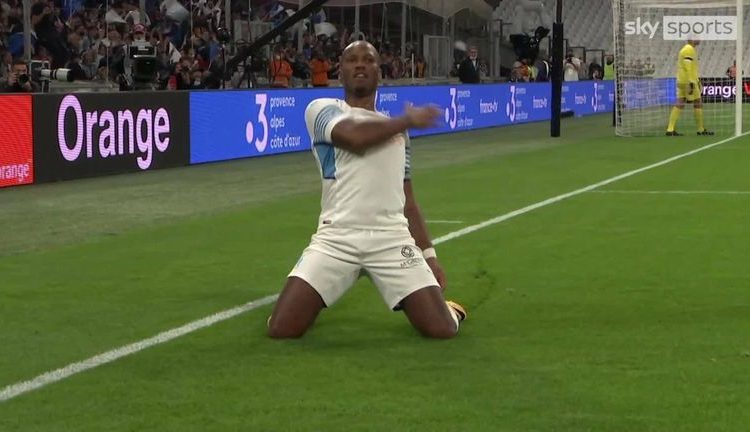 Didier Drogba rolled back the years on Wednesday night, scoring an impressive hat-trick during a charity match and even treating supporters to his iconic celebration.

Drogba was part of a Marseille squad facing a UNICEF XI managed by Arsene Wenger, with the striker also playing alongside the likes of Robert Pires and recently retired Samir Nasri.

For Wenger, Drogba’s display no doubt gave him horrid flashbacks to his Arsenal days when the Ivorian would regularly make the Emirates his personal playground.

The 43-year-old scored three of his side’s goals, with Formula One race driver Pierre Gasly also getting in on the act as the Marseille side cruised to a 7-4 win at the Orange Vélodrome.

For his first goal, Drogba was alert in the box as Eric Abidal failed to clear his lines before he stole the ball away from him and rolled it into an empty net.

The former Chelsea man then wheeled away and unveiled his trademark celebration to the home faithful and one we have been so accustomed to seeing over the years.

👑👑👑 The King @didierdrogba hits the back of the net and then the trademark celebration.#MatchDesHéros 💙 pic.twitter.com/jCT6iog73N

His second goal was just as – if not more – impressive as he hung around on the edge of the box before giving the keeper the eyes and curling his effort into the bottom left corner.

And then the icing on the cake to complete his hat-trick. Watching this one back again, the composure on this finish shows that class is well and truly permanent.

Just like his second, Drogba bided his time and waited for the killer pass and rather than smashing the ball, gently caressed his shot to nestle into the corner.