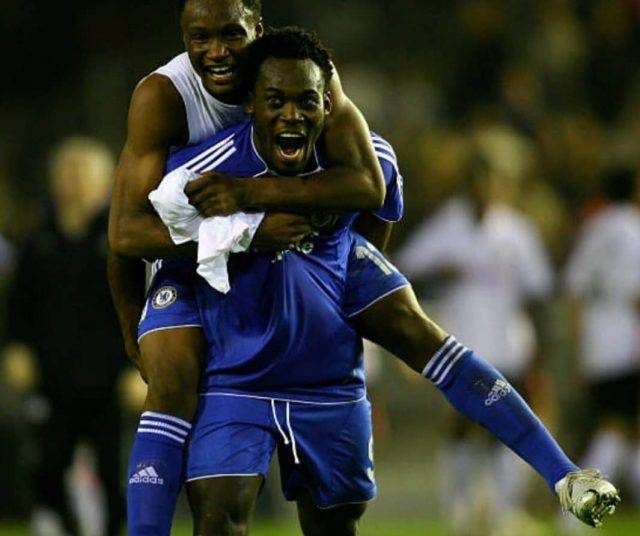 Former Chelsea midfielder, John Obi Mikel, has credited former teammate Michael Essien for giving him the confidence to succeed at the London club.

Mikel, 34, who currently plays for Kuwaiti Premier League side Kuwait FC, joined the Blues in 2006 from Norwegian side Lyn Oslo and went on to establish himself at Stamford Bridge where he won two Premier League titles in 2010 and 2015, and the Champions League in 2012.

In total, the former Nigerian captain spent 11 trophy-laden years at Chelsea where he played a total of 372 games, scoring one goal and contributing ten assists before leaving for China in 2017.

But Mikel contends none of that would have been possible if it wasn’t for his Ghanaian teammate Essien, whom he said, gave him the confidence and self belief to break through a star-studded Chelsea side.

“Suddenly, I was sharing a dressing room with all these players I had watched on television back in Africa,” Mikel told The Athletic.

“I was sitting next to Lassana Diarra. I’d be there thinking, ‘Oh my God, it’s Didier Drogba. It’s Frank Lampard. It’s John Terry’.

“Michael Essien (who joined from Lyon in the summer of 2005) really helped me. Michael always told me I was a good player and just reminded me to bring the ball down, control and pass.

“If you need to dribble, dribble. If you don’t need to, just pass. You are strong. You are fast, too. If you can, just push the ball past and run, run, run because they cannot catch you.

‘”He was the guy who really helped me and made me have a lot of confidence,” he added.