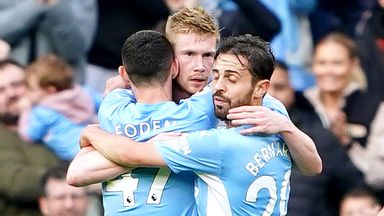 Bernardo Silva and Kevin de Bruyne scored in each half as Manchester City laboured to a 2-0 victory over a spirited Burnley at the Etihad Stadium.

Premier League champions City had beaten Burnley 5-0 in each of their last four home matches against the Clarets but made hard work of this latest encounter.

Silva converted a close-range rebound to give City the lead on 12 minutes, but the floodgates did not open as they have done previously, and they needed De Bruyne’s third goal of the season 20 minutes from time to seal the three points which lifts them up to second in the table.

Things may have been different for Burnley had Maxwel Cornet and Josh Brownhill converted chances to equalise before De Bruyne’s strike, but despite failing to claim a first victory of the season, Sean Dyche’s side can take heart from the performance into the challenges ahead.