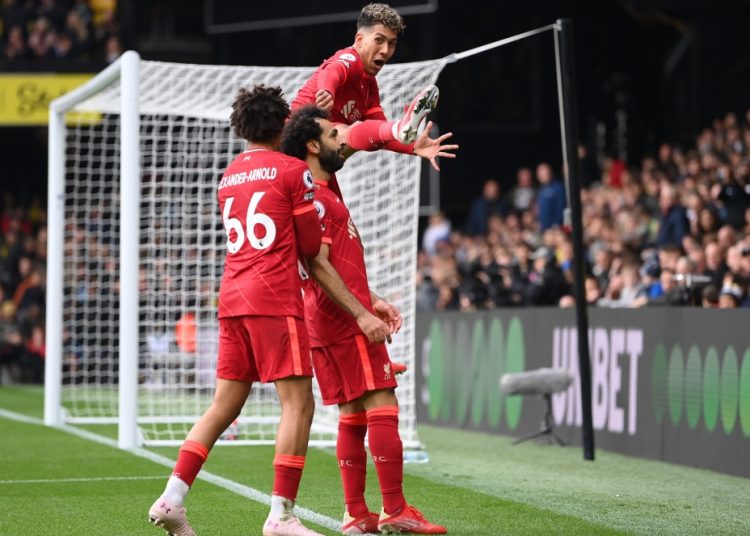 Mohamed Salah scored another outrageous goal and produced a wonderful assist to continue his sensational run of form in Liverpool’s 5-0 victory at Watford.

Roberto Firmino bagged a hat-trick, Sadio Mane reached the Premier League 100 club and Watford were awful on Claudio Ranieri’s debut – but this game will be remembered for one thing only: the irrepressible brilliance of Salah.

Betting might’ve been suspended on goal of the season after the Egyptian’s wonderful solo effort against Manchester City, but he might’ve topped it in the Reds’ very next game.

Salah stole the show once again by leaving numerous Watford players for dead and then curling into the far corner.

Reacting on commentary for talkSPORT, former England striker Dean Ashton said: “Salah is not just the Egyptian King, he’s the king of the world!

“It’s a pleasure to be here to watch that. It’s ridiculous, the footwork, the awareness of players…

“They think he’s going to shoot but he drags the ball back, sits two defenders on their backsides and then slides it coolly into the corner. What. A. Player. What. A. Goal.

“We thought the one against Man City was out of this world, this is better!”

And his assist for Mane’s opener wasn’t bad either.

Watford were pitifully poor in their first game under Ranieri – and their first piece of sloppy defending allowed Salah to seize the ball and pick an incredible, outside-of-the-foot pass to Mane.

“Wow! You talk about a knife through butter, but there was no butter there,” Ashton said on commentary.

“What a pass from Mo Salah, it just cut right through the Watford defence, unbelievable execution!

“All Mane had to do was slide onto it and slot it through. It was so composed because the pass was so good from Salah, it meant Mane could take time to decide what he wanted to do.

“That’s Liverpool at their absolute best.”

Firmino added the second, third and fifth goals from close range as the Hornets totally capitulated – and usually that would be good enough to grab the headlines.

But this was all about Salah.