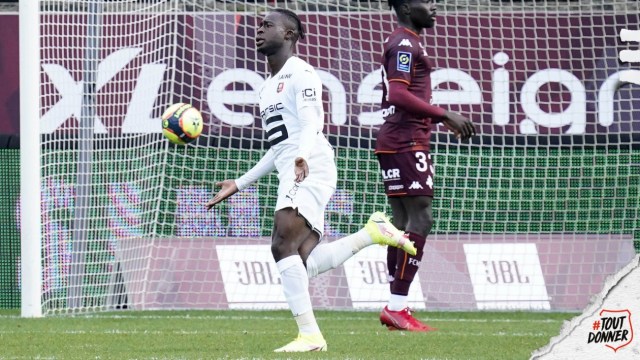 Stade Rennes coach Bruno Genesio has lavished praise on Ghana sensation Kamaldeen Sulemana after his outstanding performance against Metz in Ligue 1 on Sunday.

Continuing from where he left off before the international break, the summer signing found the back of the net with a brilliant finish to help ensure a 3-0 away victory in the matchday 10 fixture. It was his third league goal of the season.

“This is typically his characteristics: he is enthusiastic, carefree, runs fast, deadly,” Genesio said after Sunday’s tie at Stade Saint-Symphorien.

“He gives us a lot of pleasure, and he is pleasant to lead because he always comes to training with a smile to work. He has a lot of freshness, he is 19 years old and has made an incredible start to the season.

“He is also in the image of a team which has found its bearings and confidence. Everything is very fragile. We had lost and played a very average match at Marseille, we did not fall into crisis so far.

“We must not fall into an excess of confidence as that could cost us dearly. We must continue to work, there are many games with the European Cup.

“We miss Jeremy Doku, one of our best players, who is unfortunately injured. It opens up great prospects if we continue in this state of mind.”

In all competitions for Rennes, Kamaldeen has netted four goals and registered one assist in his last five games.

In Ligue 1, he has made nine total appearances for the club.

The 19-year-old joined the French outfit from Danish fold Nordsjaelland in a five-year deal in July.

He was a target of Dutch giants Ajax, Liverpool, Manchester United and Club Brugge before settling for The Red and Blacks.

He made his debut for his new club in a 1-1 draw with Lens on the opening day of the 2021-22 league season, capping his outing with his side’s goal.

He went on to find a target against Clermont before netting against Metz on Sunday.