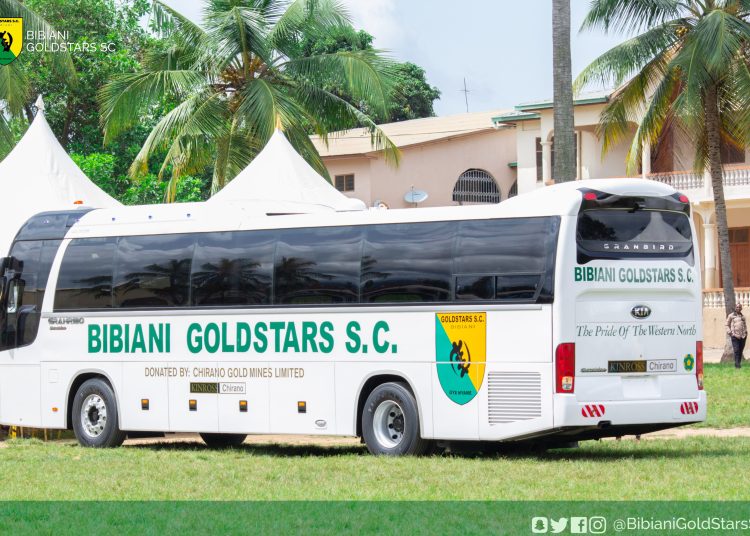 Bibiani Gold Stars have unveiled their new 33-seater bus donated to them by Chirano Mines ahead of the 2021/2022 Ghana Premier League season.

The Bibiani-based club secured qualification to the premier league, topping Zone Two of the Division One League.

The new bus is to help the club with its travels for games across the various league centres.

Speaking in an interview with Citi Sports, PRO for Kinross Ltd Chirano, Kwabena Owusu Ampretwum says the bus is to motivate the players in their quest to stay in the Ghana Premier League beyond a season.

“The socio-economic development of the area is important to us and Bibiani Gold Stars is a club that could bring investment and other opportunities to the community and also make the people happy when they are successful,” he started.

“We realized that the team didn’t have a bus and in giving them this bus, we aim at motivating them and also give them that prestige as a club in the premier league. They cannot go and play games in a small car. They need to have something to be proud of and that is why we gave them this bus,” he added.

CEO for Bibiani Gold Stars, John Kwasi Adu could not hide his excitement after receiving the bus on behalf of the team.

“This is a lovely gesture we have received from Chirano Gold Mines. Getting a bus like this is a dream come true for us. We hope that with this bus we will be able to perform well on the pitch and transform the football culture in the Western North Region. Gold Stars have come in a grand style and hopefully, we will stay in the league for years,” he said.

Bibiani Gold Stars will host Berekum Chelsea at the Dun’s Park on Sunday, October 31, 2021 in the matchday one of the Ghana Premier League.