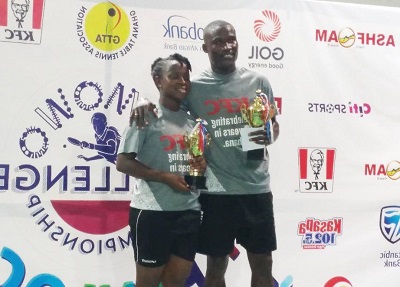 Both players came into the men’s final very confident on the back of important semi-final battles, Abrefa taking care of Bernard Joe Sam in another five-setter while Commey brushed aside Ernest Mawutor 3-1 to set a date with his fiercest rival.

It was a ding-dong battle between the two officers of the Ghana Immigration Service until Commey prevailed in the fifth set to win the clash 3-2 for a deserved victory to claim the winner’s trophy and cash prize of GH¢2,400.

Dubbed: ‘Kpalongo Spins and Smashes’ to commemorate the Ga Homowo festival, last Saturday’s competition was organised by the Ghana Table Tennis Association(GTTA) with sponsorship from Stanbic Bank, KFC and other corporate partners like the Graphic Sports.

The women’s final was equally thrilling as Eva Adom-Amankwah of the Ghana Army had little trouble taking care of an exhausted Cynthia Kwabi of Ghana Immigration Service 3-0.

Eva was awarded the winner’s trophy and GH¢2,400 by three-time African champion, Ethel Jacks.
Runners-up Abrefa and Cynthia each went home with GH¢1,200, while Sam and Mawutor each had GH¢600 for finishing joint-third in the men’s competition.

Matilda Foli of the Volta Region finished third ahead of fourth-placed Bernice Borquaye of the Ghana Navy, each of whom went home with GH¢600.

The acting Technical Director of the GTTA, Mr Charles Tachie-Menson, said the tournament formed part of the preparations for the top eight national male and female players in the country

Mr Afadzinu, who was excited at the quality of play, announced that eight players would represent Ghana at the West African Championship in Lagos, Nigeria, from November 1-4.

He urged the players to fly high Ghana’s flag in Lagos and bring back the smiles and “give people a reason to believe in the potential of table tennis in Ghana.

He announced also that the GTTA would organise the annual D.G. Hathiramani tournament — the biggest event on the sport’s calendar — before the end of the year.

“Lomachenko bout gets me closer to world title”- Richard Commey