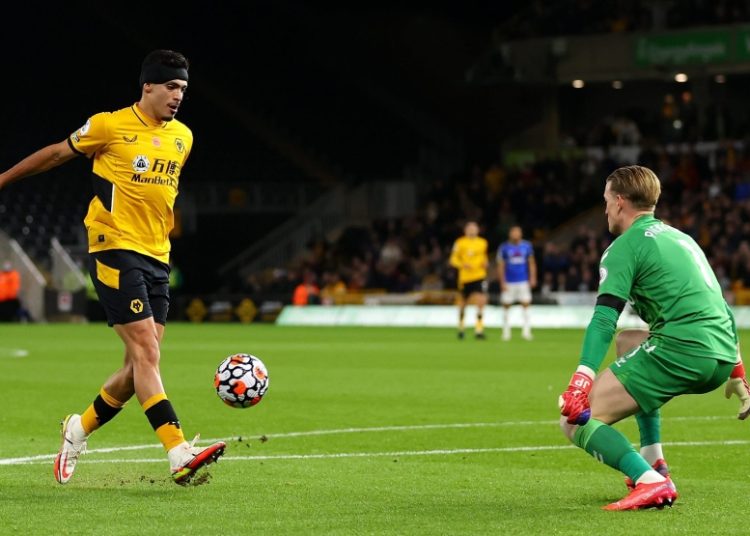 Ben Godfrey’s mistake ultimately proved the difference as Everton were beaten 2-1 at Wolves on Monday night.

The Wanderers inflicted a third straight defeat on Rafael Benitez’s side thanks to first-half goals from Max Kilman and Raul Jimenez.

Alex Iwobi did pull one back for the visitors, but the damage was already done by two England internationals, with Three Lions boss Gareth Southgate watching in the stands.

First, Jordan Pickford will be disappointed to concede Kilman’s low header after getting a big hand to it, especially after Aaron Ramsdale’s heroics for Arsenal on Saturday.

And then Godfrey sold his goalkeeper short with a weak backpass, gifting Jimenez the opportunity dink over Pickford and double the lead.

The hosts needed gifts on a night where they played Everton off the park at times, but failed to take most of their guilt-edged chances.

Despite dominating for large spells, they needed Jose Sa to pull of a big late save from an Everton corner, preventing a draw which would’ve felt like defeat against a poor Toffees side.

Nevertheless, Wolves did leapfrog their opponents into seventh place after a fifth win in seven Premier League games.

Their season has caught fire after a slow start, while Everton’s flame has well and truly been extinguished, as this followed disappointing home defeats to West Ham and Watford.