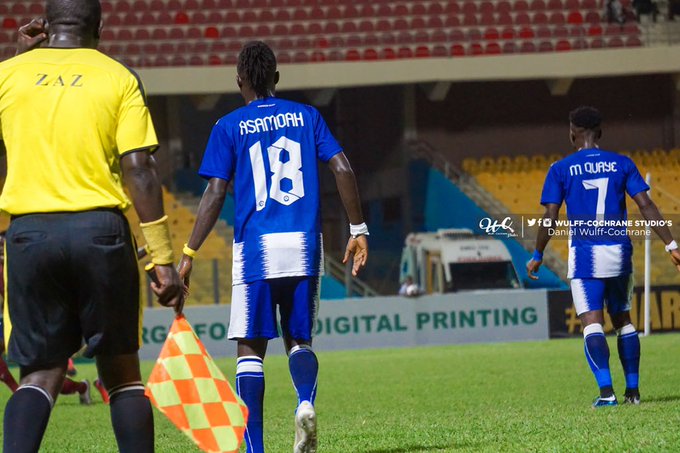 The highlight of the game was undoubtedly a hat-trick from Olympics winger Maxwell Quaye, who put Lions to the sword with 3 well-taken goals.

The first 10 minutes were filled with end-to-end action, with Lions looking the more dangerous team. Rauf Salifu constantly found space behind the right side of the Olympics defence. Salifu had a great chance on 15 mins but could only blaze over from 8 yards.

However, against the run of play, Maxwell Quaye scored a wonderful curling effort to give Olympics the lead after 20 mins

Six minutes later he hit the post again with a thunderous effort from range.

Oly grew into the match, as Lions seemed deflated and the first half ended 1-0 to the wonder club.

In the second half, Lions came flying out of the blocks and after substitute Frimpong was fouled and the resulting free-kick was headed onto the post.

Lions leveled after 57 mins through a corner kick. After a brief goalmouth scramble, Richmond Ankrah scored a diving header to level the scores.

Olympics had a great chance just 2 mins later but Quaye pulled his shot wide after being played through by Razak Yusif.

Olympics seemed to have changed to a diamond formation in midfield for the second half and it allowed them to put more pressure on Lions’ 3 centre-backs by pulling them wider whilst giving left-back Eric Osei Bonsu license to push forward.

This also allowed them to press more effectively and Lions could not build up as well as they had in the first half.

This lead to a turnover as keeper Appiah Kubi played the ball straight to an Olympics player on the edge of his box and Quaye doubled his tally with a delicate lob over the stranded keeper.

Quaye was finding space behind Jacob Mensah who was playing as the right-sided centre-back. The ball was knocked into the channel and Quaye beat Mensah for pace before being brought down in the box.

The kick was delayed as Mensah went down injured and was treated for some time but he was eventually stretched off with what looked like a serious injury.

On 88 mins Ankrah made a total hash of a simple clearance and allowed Quaye to get in behind the defence once again. His left-footed effort was not good enough and was pushed away by Kubi.

This was the last meaningful action of the game and Olympics go 3rd with 4 points after two games.