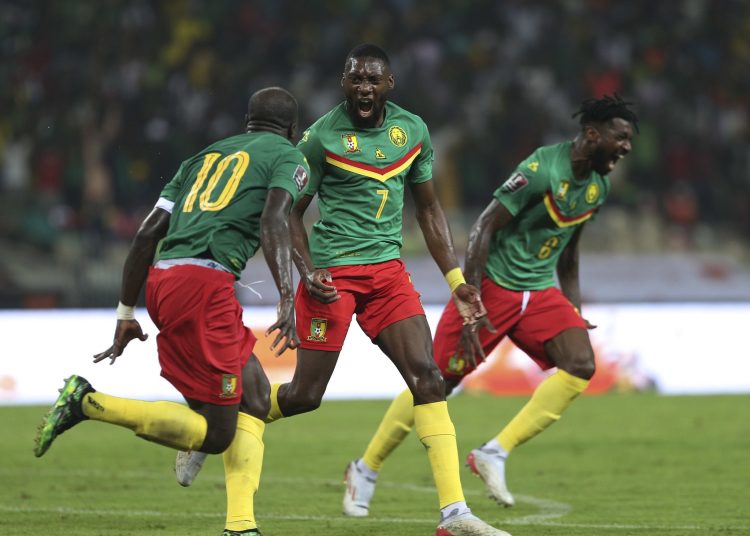 Cameroon and Tunisia clinched the final places in the African play-offs for the 2022 World Cup.

Cameroon edged past Ivory Coast 1-0 in the match-of-the-day while Tunisia eased to a 3-1 win over Zambia to seal top spots in their respective groups.

Earlier on Tuesday Algeria and Nigeria were both held to draws by their closest rivals but still progressed to next year’s final qualifiers.

The much anticipated Group D clash between Cameroon and visiting Ivory Coast did not disappoint in what was one of the best games of the African qualifiers.

The hosts took the lead in the 22nd minute through Lyon’s Karl Toko Ekambi as his shot looked to take a slight deflection past Sylvain Gbohouo in the Ivorian goal.

Ajax goalkeeper Andre Onana proved his value in just his second game since coming back from a drugs ban by pulling of some good saves.

His Ajax club-mate Sebastien Haller did manage to beat Onana only for the ball to hit the bar as the Cameroon held on for the win and stayed on track to play at their eighth World Cup finals.

In the other match in the group a second-half own goal from Malawi captain Limbikani Mzava gave Mozambique their first win of the campaign.

The results means Cameroon win the group with 15 points, just two ahead of Ivory Coast as Mozambique finished third on four points, one more than the Flames.

In Group B Tunisia secured a 3-1 win at home over Zambia which was enough for them to progress to the play-offs.

Aissa Laidouni, who plays in Hungary, opened the scoring after 18 minutes. That lead should have been extended soon after but Whabi Khazri had a penalty saved, after he had been fouled in the area.

Nottingham Forest’s Mohamed Drager did double the lead in the 31st minute and Ali Maaloul added a third before the break.

With 10 minutes left to play Rangers striker Fashion Sakala, who scored a hat-trick against Mauritania on Saturday, pulled one back for Zambia as he followed up on his own penalty.

In the other game in the pool Equatorial Guinea had needed win coupled with a loss for Tunisia to have any chance of making the play-offs, in the end they could only manage a 1-1 draw in Mauritania.

Greece-based captain Aboubakar Kamara gave Mauritania the lead midway through the first half before Saul Coco, who plays for Las Palmas in Spain equalised on the hour mark.

The results see Tunisia top the group with 13 points, two ahead of Equatorial Guinea in second, with Zambia in third on seven and Mauritania bottom.