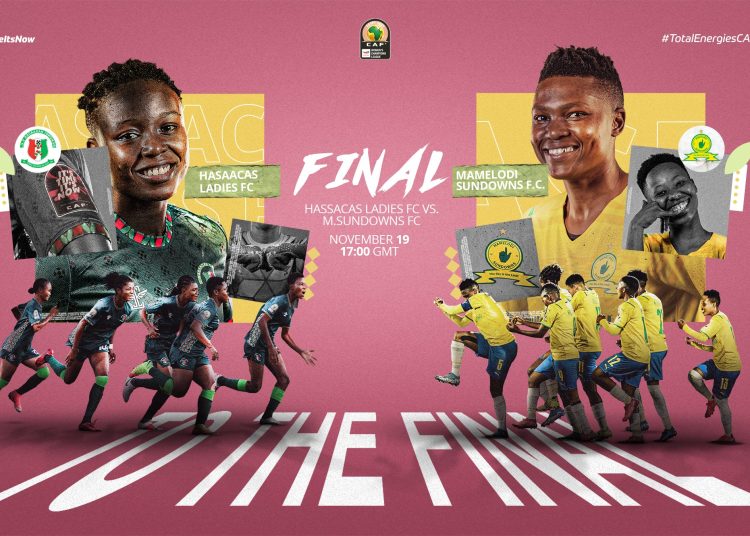 Ghana’s Hasaacas Ladies will take on South Africa’s Mamelodi Sundowns in the final of the CAF Women’s Champions League on Friday evening, with the big trophy, and ultimately the history of becoming the first team to win the competition both in the offing.

The final is scheduled for 17:00GMT at the June 30 Stadium in Cairo.

The Hasmal Ladies made it to the Women’s Champions League after beating River’s Angels in the final of the WAFU-B zonal qualifiers and have been unstoppable so far in the competition.

Yussif Basigi’s side have been scoring for fun, with Evelyn Badu in pole position to claim the golden boot award with five goals.

They booked their spot in the final with a hard-fought 2-1 win over Morocco’s ASFA Ladies.

With four clean sheets, and a penalty shootout win over Malabo Kings in the semi-finals, Mamelodi Sundowns will be hoping for nothing but a win when they take on Ghanaian giants, Hasaacas Ladies in Cairo later tonight.

It is clear Sundowns are difficult to break down but they face a free-scoring Hasaacas Ladies side who have the most goals in the tournament so far.

Hasaacas coach Yussif Basigi in his presser stated that he has faith in the team ahead of the cup final.

“I have faith in my goalkeepers, defenders, midfielders and attackers. You will see more variations of how the team plays,” Yussif Basigi, Coach of Hasaacas Ladies.

Sundowns coach Jerry Tshabalala, on his part, said his ladies are prepared for the crunch game against Hasaacas Ladies.

“It’s a big game. We wanted to be here, and we did it. We saw their strengths and their weaknesses, so we prepared well for them,” Jerry Tshabalala, Coach of Mamelodi Sundowns.