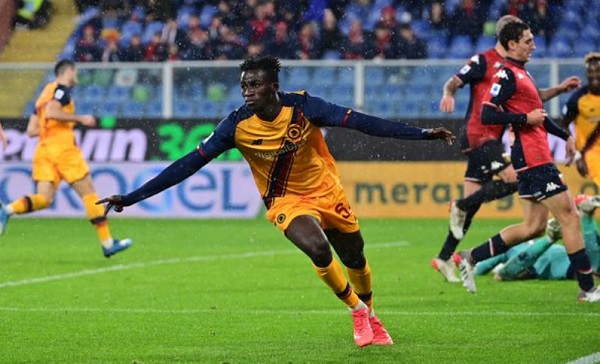 Roma youngster Felix Afena-Gyan has insisted he was not offended by a remark, initially taken to be racist by some, made towards him in a video in which he received a gift of shoes from Jose Mourinho.

Former Chelsea manager Mourinho proved that he is a man of his word by fulfilling his promise to the young forward. But while unwrapping a pair of Balenciaga shoes, someone off-camera can be heard saying: “There are bananas inside”.

After receiving plenty of messages regarding the comment, Afena-Gyan has downplayed any suggestion the comment was racist, saying on Instagram : “I have been reading a lot of comments about the video I published earlier today of a special moment for me with the coach. I want to assure you all that I was not offended by the background comment made in the video in any way — and that I truly believe there was no racist intent.

“Since the first day I arrived at the club I have been welcomed into the family by everyone, who have joked with me like they do all members of the family. Because they see that I eat bananas a lot that has become a thing we laugh about sometimes — and I believe the comment was another example of that.”

Mourinho’s Giallorossi were 0-0 down with 16 minutes remaining against relegation-battling Genoa on Sunday but were saved by the teenage prospect.

The 18-year-old scored a late brace at the Stadio Comunale Luigi Ferraris to put an end to his side’s three-game winless run.

Afena-Gyan had previously played 78 minutes of league football before his brace in the 2-0 victory but already appears to be one of Mourinho’s favourites.

However, although Mourinho was obviously ecstatic with the three points, ‘The Chosen One’ had to pay the price. Mourinho promised Afena-Gyan that if he made an impact off of the bench then he would buy the no.64 a new pair of really expensive shoes.

In a video posted on Twitter, Mourinho immediately fulfilled his promise by bringing the shoes into the training ground.

Speaking after the match, the 17-year-old heaped praise on Mourinho, and explained the impact he is having on his development.

“Mourinho is teaching me a lot and I am learning a lot from him,” he said.

“He is someone who has achieved a lot during his career and he is a great person. I am glad to be working with him.”

Speaking about Afena-Gyan’s performance after the game, Mourinho said: “What impressed me the most was his cool head in front of goal, If he is not in terms of technique fantastic, he does have a strong mentality.

“You get these kids now who think they know everything, but he is humble and you can sense he just absorbs all this information from everyone around him. That’s fantastic.”

This isn’t the first time that Mourinho has been forced to dip into his pocket following a good performance from an individual player.

Whilst at Tottenham, the manager promised Sergio Reguilon that he would buy him a £500 leg of Spanish ham if Spurs beat Manchester City last year, and they did thanks to goals from Heung-Min Son and Giovani Lo Celso.
Source: Mirror Football
Tags: AS RomaFelix Afena-GyanJose Mourinho
Previous Post