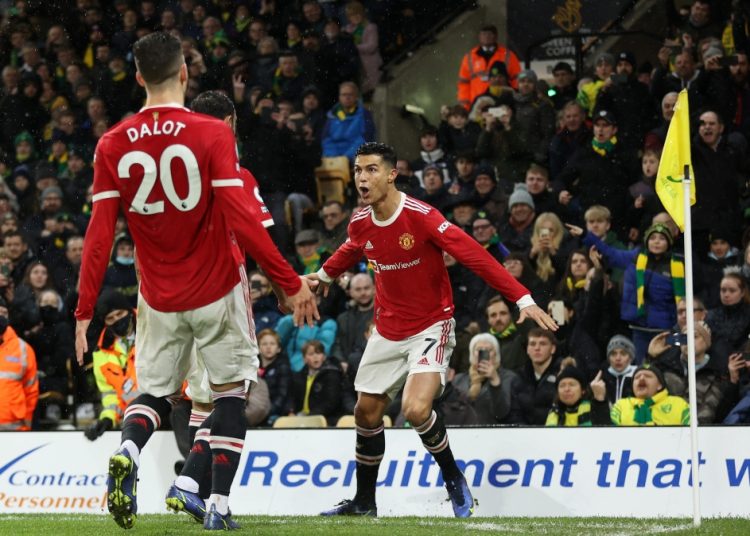 Cristiano Ronaldo was Manchester United’s saviour once more as his penalty helped them edge to a 1-0 win at Norwich.

After being pulled down by Max Aarons, the Portuguese slammed the ball past Tim Krul to make it two wins from two in the Premier League for interim boss Ralf Rangnick.

Man United’s star man could have had his second of the night late on but put a close-range effort over the bar. Meanwhile, Canaries goalkeeper Tim Krul saved efforts from Ronaldo, Alex Telles and Harry Maguire in the first half.

The Red Devils were on the whole deserving winners, but the home side had their chances – David de Gea doing brilliantly to deny Teemu Pukki and Ozan Kabak, while Billy Gilmour’s deflected strike whistled just past the post.

There was a worrying moment just before Ronaldo’s goal as Victor Lindelof was seen holding the area around his chest.

No chances were taken by Man United’s medical staff as the defender was swiftly taken off.

It was a steady start to the Carrow Road clash with Man United controlling possession although they did manage to carve out a few meaningful opportunities.

Krul tipped a deflected Telles free-kick onto the bar, while also beating away Ronaldo’s left-footed strike. Krul was also equal to Maguire’s stooping header which almost looped into the net.

Norwich didn’t come to the table in an attacking sense until the 56th minute but it was an effort almost worth the wait as Pukki’s rasping left-footed strike needed De Gea to produce a fine stop.

The 70th minute of the match saw a concerning moment as Lindelof went down on the pitch with a complaint with his chest. Eric Bailly was brought on in his place.

The 70th minute of the match saw a concerning moment as Lindelof went down on the pitch with some kind of complaint with his chest. Eric Bailly was brought on in his place.

United got their penalty moments after the change was made as Ronaldo was dragged to the floor as Aarons grabbed him by the neck. Ronaldo made no mistake as he smashed the ball home from 12 yards, sending Krul the wrong way.

Dean Smith’s side almost levelled straight away but De Gea did brilliantly to keep out Kabak’s downward header. The Man United keeper was beaten all ends up by Gilmour’s deflected strike, but it curled the wrong side of the post from a Norwich perspective.

Ronaldo could’ve had his and Man United’s second on 85 minutes, but he put the ball over the bar from just over six yards out, however, Marcus Rashford’s pull-back was played slightly behind him.