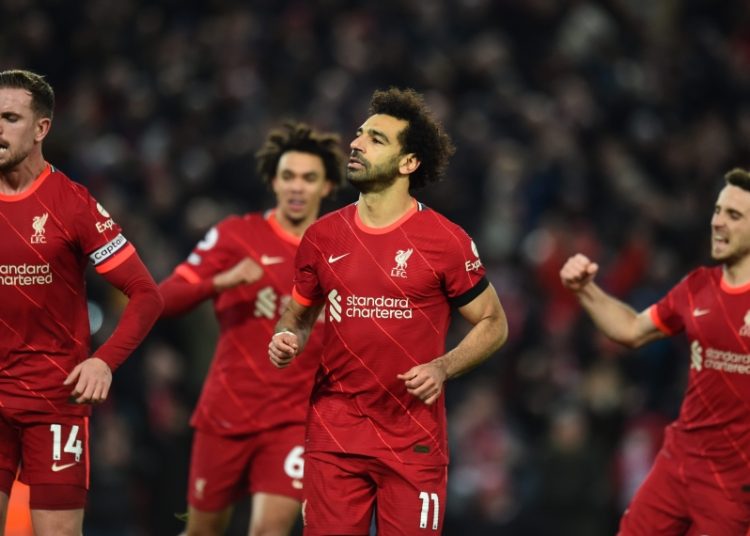 Steven Gerrard suffered a defeat on his Anfield return as his Aston Villa side lost 1-0 to Liverpool.

Mohamed Salah’s second-half penalty was all that separated the two sides, the Egyptian firing past Emi Martinez after being brought down by Tyrone Mings.

The home side dominated possession and created a good amount of chances – Martinez doing well to deny Salah and Andy Robertson’s deflected header in the first half.

Martinez also beat away Virgil van Dijk’s header from a corner but couldn’t quite get to Salah’s pinpoint spot-kick.

Gerrard’s men came out of their shell more in the final 20 minutes and had a decent shout for a penalty waved away as Alisson made contact with Danny Ings in the box after his clearance was inadvertently blocked by Joel Matip.

But it wasn’t to be for Gerrard, who was given a good reception by the Anfield faithful despite being in the opposition dugout.

Villa’s approach was very unlike the way Gerrard has tried to get them to play so far as they sat back, but it was pretty effective to begin with.

Robertson’s header, which deflected off Matty Cash, was kept out by Martinez, while the Argentine got down smartly to save Salah’s cheeky near post strike from the right.

The Liverpool faithful were adamant they should’ve had a penalty when Robertson was felled in the box but referee Stuart Atwell was having none of it.

The second half followed a similar pattern to the first as the Reds continued to dominate the ball and try to break down their stout opponents.

An unmarked Van Dijk should’ve done better with a header from a corner on the left but the centre-back still forced Martinez into a great save.

But Martinez couldn’t get to Salah’s penalty on 65 minutes, fired low to the keeper’s left via the post after Mings’ clumsy challenge.

Jürgen Klopp’s men should’ve made it 2-0 on 82 minutes when Salah, Sadio Mane and Diogo Jota found themselves against one Villa defender on the counter-attack, however, Salah’s bad pass saw the attack get snuffed out.

And it almost cost them, dear, when Alisson gave Ings a sniff at goal after firing the ball straight at Matip. In the resulting scramble, the Brazilian appeared to bring the ex-Liverpool striker down but Atwell pointing to the spot wasn’t forthcoming.