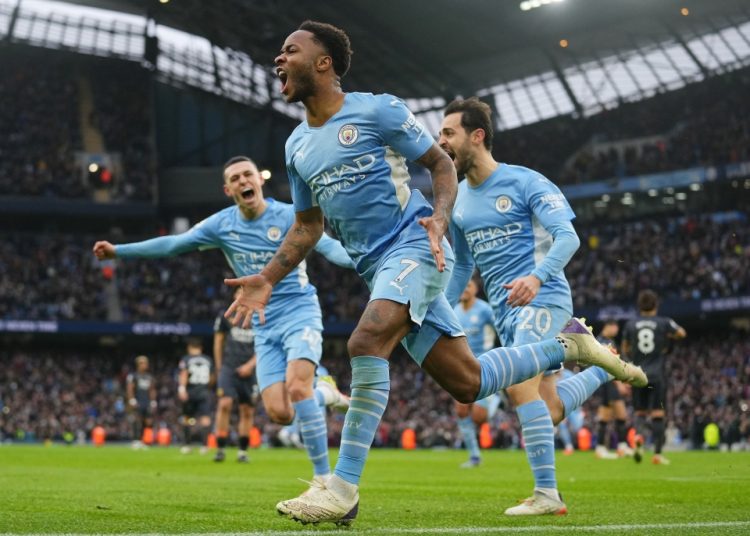 Raheem Sterling finally entered the Premier League 100 club, although achieved his century of goals in a controversial fashion in an incident-packed win for Man City over ten-man Wolves.

The England international has become the 32nd player to reach triple figures in the top flight since the competition’s inception.

But many will suggest the forward should still be on 99 after he benefited from a very dubious handball decision to fire in from the spot and hand defending champions and current leaders Man City all three points.

João Moutinho was penalised for a handball in the penalty area after he blocked a Bernardo Silva cross. The Wolves midfielder’s arm was raised, but the ball appeared to strike his armpit.

It led to a lengthy VAR delay, which resulted in referee Jon Moss pointing to the spot, with Sterling making no mistake to wrap up a close-fought victory for the hosts.

But that wasn’t the only drama in a game of ill-discipline from both teams, with Wolves playing the second-half with ten men following Raúl Jiminez’s needless sending off on the stroke of half-time.

Already dealt a yellow card for an ill-timed challenge on Rodri, the Mexican striker then attempted to block the resulting free-kick, which immediately earned him a second booking and his marching orders.

The Wolves star was branded ‘idiotic’ for his moment of madness, with talkSPORT pundit and former City star Trevor Sinclair saying he’d led his Wolves teammates down.

Before that, the match was halted for about five minutes in the first half after a nasty clash of heads between Wolves teammates Ruben Neves and Max Kilman.

Both players remained on the turf for a while, with Kilman covered in blood after the mid-air collision as they both attempted to clear the ball away.

Remarkably, though, both were cleared to continue playing and none of the two permitted concussion substitutes were used.

Kilman even had a chance to seal a point for the visitors in stoppage-time, but his header was tipped over the bar by City goalkeeper Ederson.

That save also made it 100 clean sheets for the Brazilian in a City shirt, to cap off a match of century milestones.

Sinclair had his say on Sterling’s controversial winner and the penalty decision, and said it was the right call from the VAR and referee Jon Moss.

As a former City player, there’s every chance he had his blue-tinted glasses on…

The talkSPORT pundit said: “There was a bit of controversy for the penalty but, for me, it was one of them where did it touch him armpit first and then go onto his arm?

“I don’t think it matters because his arm is in a very unnatural position, it’s making his body bigger, and even if the ball did touch his side, his arm was always going to come over the ball and stop it going through.

“So I think Jon Moss got it right. It went to VAR and he didn’t get asked to look at the monitor, which means after VAR looked at it several times, they agreed it wasn’t an obvious error.

“The penalty was taken, Raheem Sterling, the 100th goal of his Premier League career – outstanding.

“I’m really pleased for him because he’s been on 99 for a while, and that was also Man City 499th game under Pep Guardiola in the Premier League.”