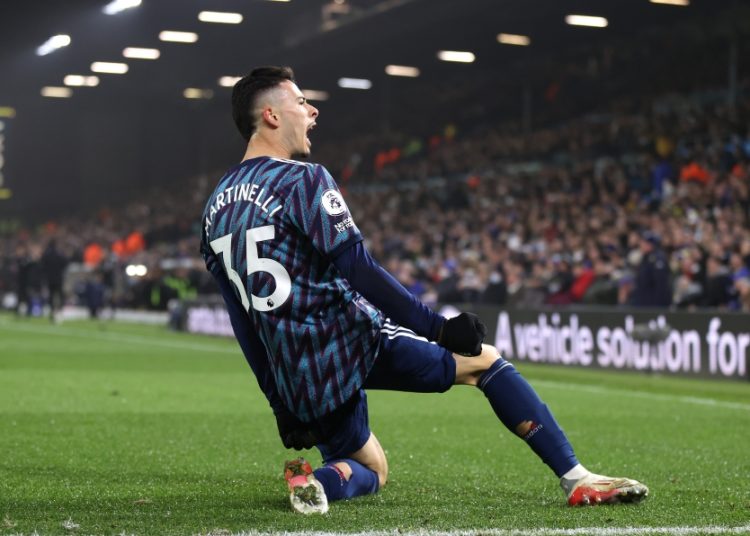 Arsenal piled more misery on Leeds as Marcelo Bielsa’s side conceded four more goals in a defeat at home.

All eyes were on Elland Road on Saturday with every other Premier League game called off with the Gunners triumphing 4-1.

It follows the 7-0 thumping they received at the hands of Man City during the week and things are looking bleak for Bielsa’s side.

Gabriel Martinelli was on top form again, scoring twice, with the third coming from Bukayo Saka and Emile Smith Rowe coming off the bench to net again.

There are some mitigating circumstances for Leeds with just nine senior players available due to injury woes. Had those absences been COVID-19 related then the game would likely have been called off.

Martinelli picked up from where he left off in recent games, firing Arsenal into a 16th-minute lead at Elland Road after Leeds had failed to clear the ball in their own penalty area.

The Brazilian was perhaps proving that they club don’t need Pierre-Emerick Aubameyang as he grabbed a second in the 28th minute.

Leeds were dealt another injury blow in the 31st minute when Jack Harrison was forced off and replaced by Crysencio Summerville.

Arsenal made it 3-0 three minutes before the interval when Bukayo Saka’s shot took a slight deflection off Klich.

The goal was awarded after a VAR check, which confirmed Saka had been onside during the build up.

At half-time, talkSPORT’s co-commentator Micky Gray said: “I’m really worried for them. The back line are not getting any help from the midfielders in front of them.

“Every time Arsenal go forward they look like scoring.

“We know they are depleted. If they don’t change things at half-time we are looking at another scoreline like Tuesday against Man City.”

Leeds steadied the ship after conceding three first-half goals and reduced the deficit through Raphinha’s 75th-minute penalty after Ben White’s foul on Gelhardt.

Any hopes of an unlikely comeback were quickly snuffed out when Smith Rowe added a fourth for the Gunners as he latched on to a beautiful pass from Martin Odegaard that split the home defence.

Arsenal cemented their place in the top four while Leeds remain in 16th and are looking over their shoulder.