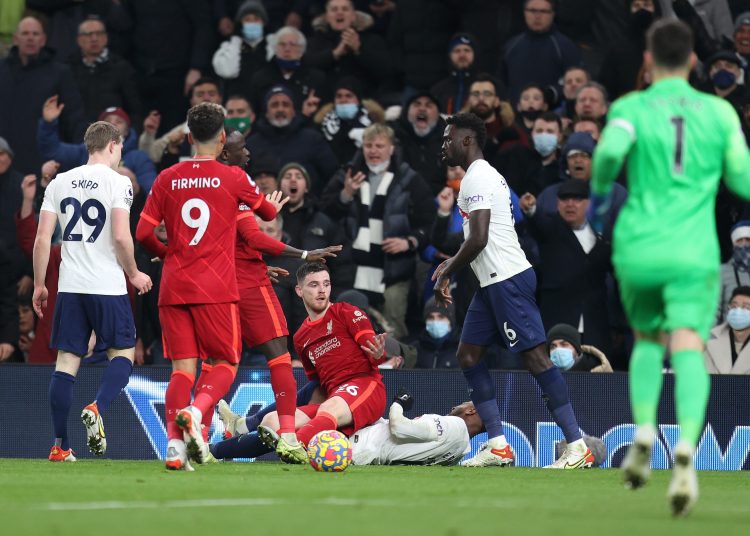 There were contrasting fortunes for Harry Kane and Andy Robertson, who both scored and were responsible for feisty tackles during Tottenham’s enthralling 2-2 draw against Liverpool.

However, only one of them was sent off as Robertson was dismissed for a wild swing of the leg on Emerson Royal, shortly after Heung-Min Son pegged Liverpool back.

Kane should’ve gone down the tunnel in the first half but was only given a yellow card for a late challenge on Robertson moments after giving Spurs the lead.

Diogo Jota’s header ensured both sides were level at the break before Robertson’s effort from close range put the visitors in front briefly.

But both sides missed a whole host of chances to win one of the most entertaining matches of the season you’ll see.

The match was played at a frenetic pace right from the very first minute, and both sets of fans may be disappointed their respective teams didn’t win, but they will have no complaints about the entertainment value.

Liverpool started stronger, but it was Antonio Conte’s men who took the lead as Harry Kane scored just his second goal of the Premier League season with a trademark finish after being played through by Tanguy Ndombele.

They could’ve doubled their lead on 16 minutes on the counter when Kane found himself in oceans of space down the right, but the striker’s cross was just beyond the reach of Heung-min Son to get enough contact on the ball.

Kane then got a huge slice of luck when his firm tackles on Robertson left the Scotland international in a heap. Referee Paul Tierney was accused of ‘bottling’ the decision after he and VAR decided a yellow card was the appropriate punishment for him.

Jürgen Klopp, who later got booked by Tierney for his animated protests, was left incensed but would’ve breathed a huge sigh of relief when Alisson got a fingertip save to deny Dele Alli, who had the freedom of the Tottenham Hotspur Stadium to score.

And Liverpool made Alli pay for that missed chance as Jota levelled things as he headed Sadio Mane’s cross from the left-back from where it came and past Hugo Lloris.

Jota was then felled in the box by a clumsy Royal challenge but no penalty was given. Klopp was then given his yellow card in the aftermath of this incident.

Trent Alexander-Arnold and Jota went close either side of half-time and Spurs had their own penalty appeal when Kane went down in the box.

Kane then missed two glorious opportunities to put his side again. The first saw Alisson smother his effort after Dele Alli’s pass to the Spurs striker lacked the zip. And from a corner moments later, Kane managed to head over from less than six yards out.

It looked like Spurs were going to pay for it when Robertson headed Liverpool in front of close range – the home side furious with the attack not stopping after the ball hit Mohamed Salah on the arm.

But Conte’s man rallied and was level on 74 minutes when Son tapped in as Alisson made a hash of clearing the through ball played to the South Korean.

Robertson’s frustrations boiled over not long after as his wild tackle on Royal saw him get an early bath, Tierney sending him off after looking at the incident again on the pitchside monitor.