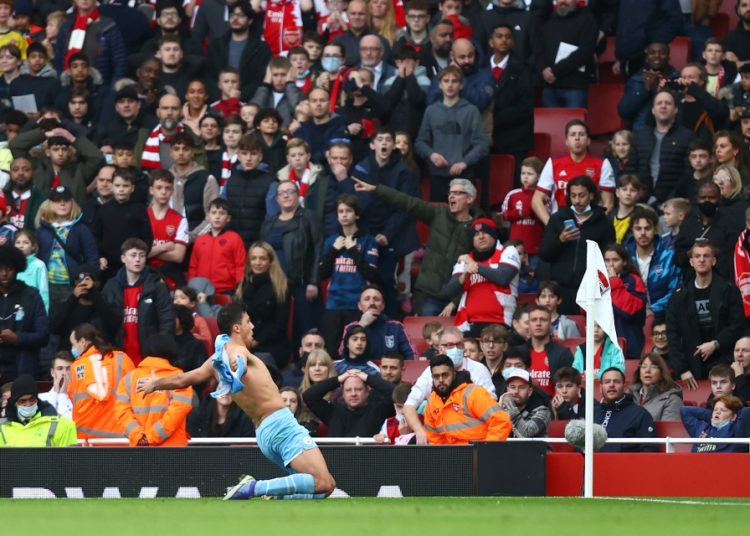 Arsenal were guilty of ‘losing their heads’ and were left shocked by a stoppage-time goal from Manchester City who claimed a 2-1 victory in a stunning match to kick-off 2022.

The Gunners’ first-half performance was described as ‘the best we have ever seen against the Premier League champions, as Bukayo Saka scored a brilliant breakaway goal to hand the hosts a half-time lead.

It was fully deserved after 45 minutes that saw City harried, pressed and rattled like they have not been this season, as they went into the game with an 11 point lead at the top of the table.

But it all fell apart after the break in a quite mad three-minute spell, which saw Arsenal concede a penalty, miss a sitter and then get a man sent off.

Granit Xhaka was again front and centre of the collapse as he was turned in the area by Bernardo Silva and then dragged down the City ace in the penalty area.

Riyad Mahrez stepped up to put the spot kick away, in a parting gift to his club before the Algerian departs for the Africa Cup of Nations.

Arsenal were not happy with the penalty decision, though, with Xhaka, stand-in captain Alexandre Lacazette and centre-back Gabriel furious with the referee.

Gabriel earned a yellow card for his protests, and moments later was booked again after a moment of red-blooded madness.

The Gunners had just gone agonisingly close to going back in front – the lively Gabriel Martinelli firing shockingly wide with the goal at his mercy after a mix-up at the back from City.

Nathan Ake was forced to clear the ball off his line after Ruben Diaz accidentally headed the ball over his own goalkeeper in an attempted back-pass. Martinelli pounced, but his awkward shot fired wide of the post.

Then, attention immediately turned to the centre-spot, with replays showing Gabriel clobbering City striker Gabriel Jesus in the build-up to the Gunners’ miss.

It saw the Brazilian sent off, just minutes after being booked for his penalty protests.

The rest of the game maintained its chaotic feeling and, when it appeared the points would be shared, Rodri stepped up during the six minutes of stoppage-time to hand City a late, late victory.

It made it 11 Premier League wins in a row for the defending champions, who go 11 points clear at the top of the table before title rivals Chelsea and Liverpool play each other on Sunday.

But this game will be remembered for Arsenal throwing it away after their scintillating first-half display, with isolating manager Mikel Arteta likely to be tearing his hair out as he watched the game at home.