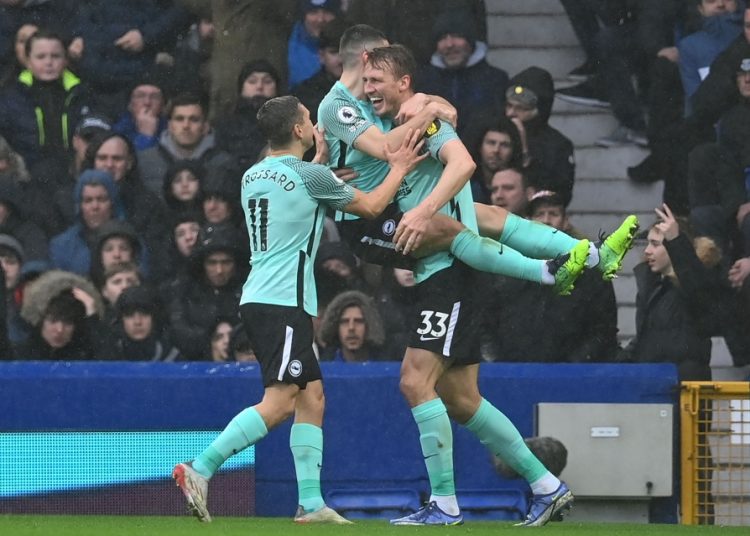 Everton to action at Goodison Park for the first time since December 6 in disappointing style as they lost 3-1, Brighton, extending their miserable run.

Manager Rafael Benitez will now see the scrutiny on him increase as the Toffees have now won just one of their last 12 Premier League matches.

Home fans will have wished they hadn’t bothered turning up to watch their side as a woeful first-half performance saw them 2-0 down at the break.

Everton did improve in the second period and Anthony Gordon was at the heart of it.

His shot forced an own goal from Adam Lallana, while he netted a goal of his own after Mac Allister got his second of the game.

But Everton, ultimately, were unable to get a vital equaliser as they sit just seven points clear of the relegation zone.

It was a torrid first half that scuppered any hopes of an Everton win.

Their defending was particularly poor for Brighton’s second goal which saw 6ft7in Burn unmarked at the back post to head home with ease.

And after Calvert-Lewin’s penalty miss, talkSPORT reporter Matt Jones couldn’t quite believe the display he was seeing.

“You talk about the defending,” he said. “Let’s not forget Everton have got five defenders and two defensive midfielders on the pitch here today.

“They just look all over the place, they look like they haven’t played together before.

“Seamus Coleman, I think, is struggling out of position at left-back. He wants to play on his right foot, and he’s playing on his left and that’s not working for him.”

Gordon’s second-half show was a real positive but too many of his teammates were unable to put their weight to the cause to and defeat was inevitable.

Everton fans booed their side off at the end of the game and while owner Farhad Moshiri has publicly backed Benitez in the past, pressure is once again increasing on the Spaniard.