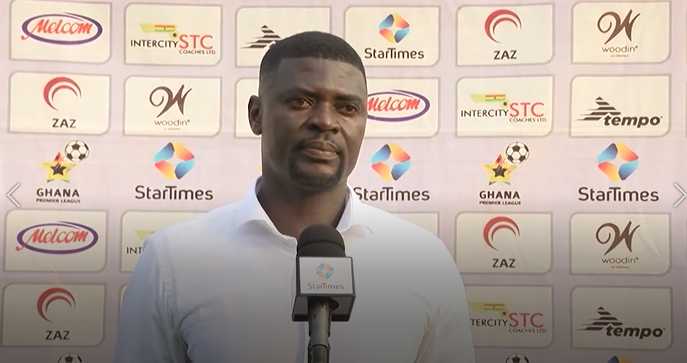 Head Coach for Accra Hearts of Oak, Samuel Boadu was not impressed with the refereeing in his side’s outstanding match against his former club, Medeama Sporting Club.

The Phobians fell to a late 1-0 defeat in Tarkwa on Wednesday afternoon in a Ghana Premier League Week 6 fixture.

The game seemed to be heading for a goalless draw when Medeama were awarded a penalty in the 80th minute after a Hearts defender tackled Ahmed Toure inside the 18-yard box.

Former Phobians defender, Vincent Atingah scored from the spot to hand Hearts their second defeat of the 2021/2022 season.

“I don’t talk about officiating but for today I think the referee was bad. He awarded Medeama a dubious penalty and I actually don’t know the motive behind the red card. Maybe he wants to destroy our team,”  A fuming Boadu said.

Samuel Boadu’s men will next face Kumasi Asante Kotoko in their other outstanding fixture on February 20.