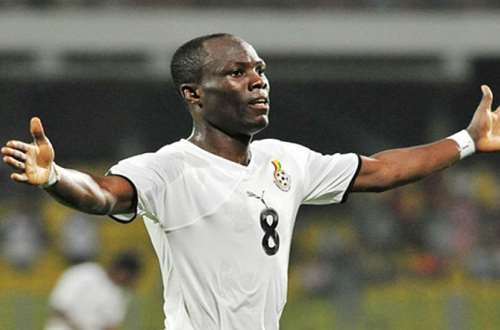 Former Black Stars midfielder, Emmanuel Agyemang Badu, has called for the Black Stars to initiate the process of a rebuild.

The Qingdao midfielder was speaking in the wake of Ghana’s disappointing AFCON 2021 campaign.

The Black Stars had their worst campaign to date, failing to register a win for the first time in their history.

The biggest story was undoubtedly the 3-2 loss to AFCON debutants Comoros in the final match of the group stages.

The midfielder was of the opinion that the Black Stars had sunk to untold levels and that the only way to fix the malaise was to rebuild.

“The team is collapsed, let us go for a development plan”

The midfielder. who scored the winning penalty in the 2009 U20 World Cup final. added that considering the state of the national team, the 2022 World Cup should not be a priority and that Ghana needed to move on from the past and look forward to the future.

“If we qualify for the World Cup fine, if we don’t we shouldn’t be worried. If we keep relying on the old team, then we have a long way to go.”