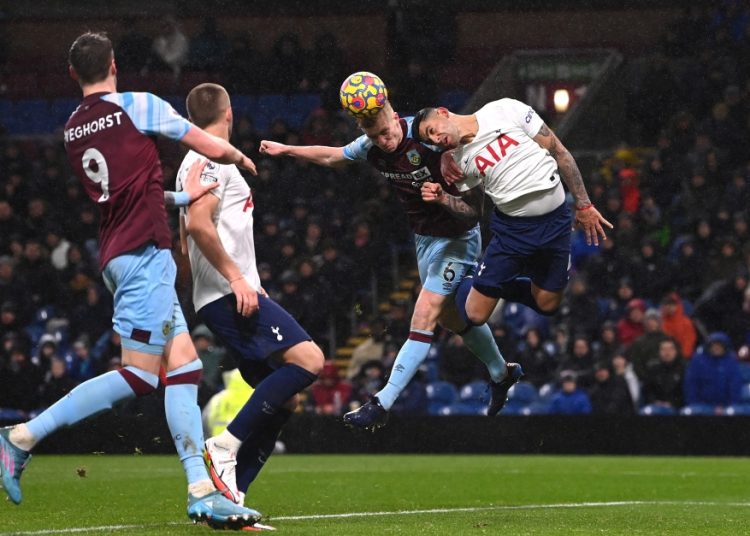 Burnley secured back-to-back Premier League wins for the first time in 13 months as skipper Ben Mee scored the only goal to beat Tottenham at a rain-lashed Turf Moor.

Mee rose above Cristian Romero to meet Josh Brownhill’s 71st-minute far-post free-kick perfectly and send it back past Hugo Lloris and into the far corner.

It secured a victory that takes Burnley to within two points of safety given their better goal difference – and within striking distance of three of the four sides immediately above them, given Sean Dyche’s side still have games in hand.

Burnley could even afford Jay Rodriguez to miss a glorious chance to wrap up victory seven minutes from time when he turned the ball over from three yards with the goal at his mercy.

But this was a bitterly disappointing night for top-four chasing Tottenham, who were a shadow of the side that won at leaders Manchester City on Saturday.

After a tepid opening period, skipper Harry Kane hinted at better when he headed against the bar at the start of the second half.

Dejan Kulusevski went close just before Burnley’s opener, with Nick Pope saving from Steven Bergwijn in the visitors’ desperate search for an equaliser.

“We’ve not been far away all season,” said Dyche. “We are beginning to get the details right. People are ready to play and take on the challenge.

“I believe in the players. When we are right, we can compete with everyone – statistically, we are strong during the second half of the season.”